Amateur radio has been a part of my life for several decades, as a faithful friend and a dominant hobby. 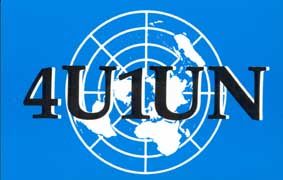 Of course, there are many other interesting things out there. But it is different from any others because it not only sharpens your technical knowledge, but also gives you many reasons to join the Amateur radio community. One of such reasons is opportunity to meet other fellow amateurs from other countries and continents, finding new friends. This is how I met and became great friends with Dmitri (Dima), RA9USU. He lives in New York and is also known by his American callsign – N2OW. History of our friendship goes far back into the 90’s when my life’s path brought me into Moscow State University Radio Club – RZ3AZO. Back then no one could possibly imagine that we would be scattered around the world, far apart from each other. I again met Dima several years later in New York, on my return trip from K1B DXpedition to “home base”- UN Mission in Kosovo.

At that time, there were no other plans to activate a rare one. My only wish back then was to get some rest after long and tiresome trip. It took me from Baker Island, Tuvalu, Fiji and 26 flight hours later, as I went from one part of the world to the other.

Somehow, thoughts about visiting New York Metro area in the East Coast of the United States for me always associated with United Nations’ Headquarters. This was of my job as a peace keeper for the UN or maybe because of certain unique radio station located there – 4U1UN. I first brought up the idea of visiting the United Nation Radio Club to Dima and then later discussed it with Ed, NT2X. Ed was skeptical, as he knew how difficult it would be. Ed once operated from 4U1UN in the 80’s and had some ‘inside’ details. For the last several years the UN Club was not on the air for reasons not entirely related to Amateur Radio. Coupled with being a separate DXCC entity, it was obvious that my dream of operating from there would only be a dream. 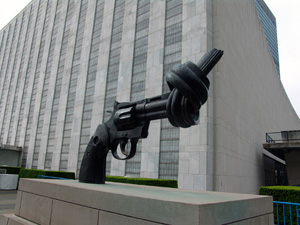 It was two year in preparation. Calls and letters to station Station Manager Mohamed, did not leave much hope for a visit to 4U1UN. I was in Austria , when I met my old friend Jun Tanaka, the Station Manager of 4U1VIC. He expressed sympathy with these utopian plans. Later he played a major role in bringing it about. But at the time I didn’t have much hope.

My visit to the United States almost didn’t happen. There were some bureaucratic problems with getting new visa issued, etc. And then – it just fell into place. Dima, who talks to me daily on ICQ, convinced me to come for the annual ham gathering, Dayton Hamvention, in Ohio. He has this unique talent of convincing people. I flew into JFK on May 2, 20004. After arranging our trip to Dayton, Dima again raised the question of 4U1UN. He thought it would be a great birthday present. I opened my notebook and found some phone numbers of colleagues who work at the UN building. With their help I called Mohamed.

It was a short call. Mohamed remembered Dima, who wanted to meet him at the 4U1UN. He later gave us the strict rules of visiting the Club Station. But there was no turning back. We had agreed on everything!

Mohamed posted the information about upcoming operation from 4U1UN, but because of short advanced notice, not every bulletin published it. Without prior approval from the station’s manager, we could not announce anything ourselves either.

The dream began to become a reality. On May, 14, while in Dayton, we received call from Mohamed. It hit us like lightning bolt. We were good to go, he confirmed the invitation for us to be guest operators of 4U1UN. We then announced our operation on the Russian DX reflector. Andy, UA3AB, relayed the message. 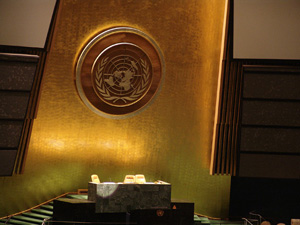 17.05.2004 c 15.00 UTC for about 12 hours N2OW(RA9USU) and RW3AH would be active from 4U1UN. They will work on every band mostly CW. Will try to operate on 40 meters specificaly for Europe and Russia
Best Regards, Andrew Chesnokov UA3AB

Later Ed, NT2X (who had no prior knowledge about any of this) and was questioned on the air by UA6LV, expressed serious doubts over the announced operation. To be honest we, could not believe it either, until the last moment…

A short history of 4U1UN

The Club has about a dozen members, all of them UN Headquarters employees. Some of them are retired and live overseas. A few are active, including the station’s manager. They invest their time and money into keeping 4U1UN on the air. The Radio Club does not accept donations and does not solicit outside help.

The Club’s founding father – Max de Henseler, HB9RS, was working at the UN between 1975 and 1989. He is now retired and living in Switzerland. His efforts made 4U1UN an independent entity for the DXCC program. In the late 80’s the station was very active and operated in most major contests. Our friend, Ed Kritsky, NT2X, operated here in 1988, during BARTG RTTY contest. 4U1UN’s electronic log shows 55,222 QSO’s made over the last 6 years. Many more are in paper logs.

Right before our operation at 4U1UN, there was another operation in February, by Bernie, W3UR, his daughter and Steve KU9C. Their story is published in QST. 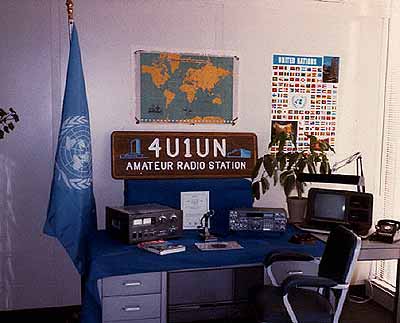 For reasons of security, access to the UN building is restricted. This is why 4U1UN is a rare guest on the amateur bands. Station is located in the building’s penthouse. Three floors down is Kofi Annan’s office (UN Secretary General), which adds to security measures and scrutiny. Each and every guest operator has to be escorted by a UN employee at all times, even to the bathroom. In case of our host, when he accommodates visitors, he still has work deadlines to meet and must do his day’s work on weekends, and sometime even at night. Needless to say, it creates a hardship.

TS-2000 Kenwood, TS-940SAT, TS-950SDX, IC-207. Two power amplifiers Kenwood TL-922, one Ameritron Commander 2500. Antennas are Titan DX-8 and Cushcraft R2000, but they are temporary dissasembled. There is a dipole antenna on the rooftop, covering 160-10m bands. It is only about 45 inches high from the roof. The dipole covers East and West. Working Asia is difficult. When the roof began to leak, an old antenna tower was removed. At this time the Club has permissions to use three solid poles 2.5 by 15 inches mounted on concrete bases, for antenna installation. But even with these restrictions Mohamed doesn’t give-up and plans to install a directional antenna, perhaps even this summer. Low Bands remain a challenge. Installing good antennas for them is extremely difficult, but looking at Mohamed’s progress, one can be optimistic. There are other difficulties. Surprisingly, working North America is a challenge. There are many noise sources in the area. The UN Headquarters building is located in the most populated area of Manhattan. It is very tough to have quality reception in this area. 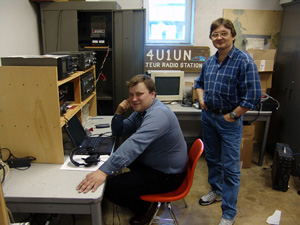 After going through security screening, together with Dima, we entered the building’s hallway, to be met by Mohamed. We were to be escorted by him at all times. We went going to the 40th floor. During our brief operation he was supposed to be with us.

As a Birthday present I had the honors of the opening salvo. One hundred watts and a simple dipole didn’t get us into an instant pile up. This is when Mohamed suggested to turn on the TL-922 amplifier. There was a trick to make it work. We had to send CW by hand and engage the amplifier by pressing microphone’s PTT button. Send the code with your left hand, control PA with your right and type the calls on the keyboard with a pinky. The third hand would have been handy! Dima was really good at mastering the process. It took us some time to learn the TS-2000 controls. In the beginning Dima was listening to the CW pile-up with a 2 kHz filter on. A DSP was tuned on at Mohamed’s suggestion and everything became normal. On sideband everything was much simpler and after a short CQ there was a huge pile-up on our frequency of 14,195 with stations from North and South America, Europe. After setting the split to 5 kHz it got easier. Problems persisted because of some unruly Italians and South American operators who continuously called on our run frequency. The band was noisy and pulling the weak signals wasn’t easy.

Первая попытка выхода в эфир достается мне – как имениннику.Approximately every five minutes I would stop the pile-up and in Russian ask for stations from Russia and the CIS. There weren’t many station, yet lots of surprises. Somehow almost everybody started speaking Russian, especially the U.S. stations! I almost fell off the chair a station from Jamaica (in the Caribbean) called us in Russian. As we went further into the afternoon, propagation got better and we began to get more Russian stations into the log. I heard familiar voices of R3AR, RK3AZ, UA4CC, UA6JR/3, UA3AIO, RK3AO, U3HB and many others. Almost at the end of operation I contacted Andy, UA3AB and asked him to be a pilot station for Europe. There is no DX-cluster at the station and no Internet access. We read the spots and questions only after the operation the next day. Analysis of the DX cluster spots revealed this announcement: 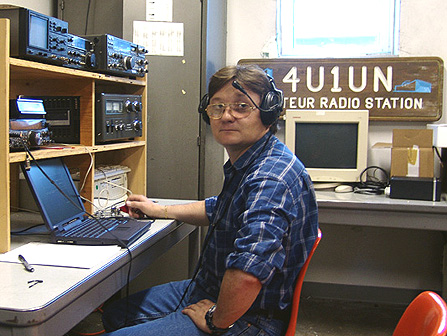 This guy, who clearly heard us calling for weak Europeans, called for 3 minutes non-stop, without much regard for anyone else. We worked him to clear the frequency and this is how he thanked us. Nice job! As usual there were some South Europeans who insisted on sending us their name, QTH, names of everybody in their household, list of all equipment in the shack and antennas. Others were screaming on our calling frequency trying to pay them back. Imagine the zoo.

Later, we read some comments on the “RussianDX” reflector how we should have operated RTTY, PSK31 …

Note that we didn’t have any operation plans based on modes or the bands, our only goal was to operate 4U1UN and give a chance to have “new one” to as many station from Eastern Europe and the CIS as possible. It was a tall order.

Close to the end of the operation, propagation to Europe and Pacific was excellent, but unfortunately we had to complete our small marathon. Huge pile-ups were still calling when we went QRT.

40 meters started to open into Europe and right before the end we managed to work UA3AB and UA3AIO on CW. Someone told us that we were much stronger on 40 than on 20 and there were many Europeans calling. We believe it, but could not do anything because the S9 noise all over the band.

80 and 160 never opened. We only made contacts with US and Canada. Ten meters and low bands never opened to Europe that day. A total of 1202 contacts were achieved which is not bad in this time of the solar cycle. For those who were fortunate to work us – QSL via HB9BOU, the station’s QSL Manager. His address is available from QRZ.COM 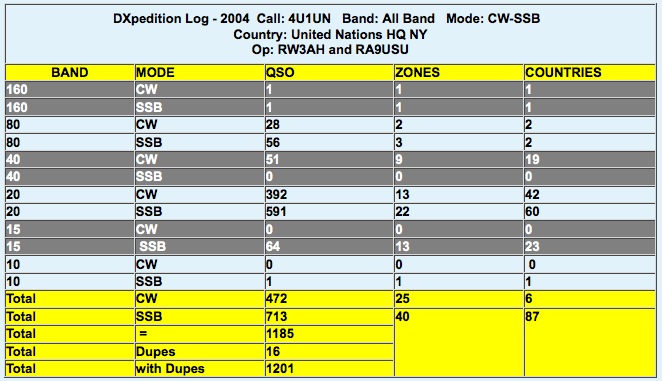 Tired but very happy, we crossed half of Manhattan island under the pouring rain and came home by subway after midnight. The impossible dream was a dream no more. One more happy page turned.

Our sincere ‘thanks’ to everybody who called us. Those who didn’t get through – don’t give up hope, as you never know…

Mohamed Jendoubi, KA2RTD- Station Manager of 4U1UN for giving us an opportunity and the best birthday present, ever. And not just for me.

JH4RHF – Jun Tanaka – for help with organization of visit to 4U1UN
RA9USU/N2OW – Dima for his support and reminding to me that Russians never give up.
NT2X Ed – for editorial help in writing this story.
W3MMM, Yuri – for technical support.
K1TTT, Dave – for technical support
UA3AB Andy for being our pilot station on 20 meters, his help and support.