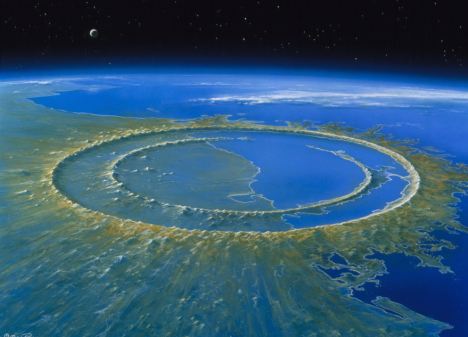 A massive asteroid might crash into Earth in the year 2182, scientists have warned.

It was first discovered in 1999 and is more than 1,800 feet across. If an asteroid of this size hit the Earth it would cause widespread devastation and possible mass extinction.

And scientists say that any attempt to try and divert the asteroid will have to take place more than 100 years before it is due to hit to have any chance of success.

If the asteroid had not been spotted until after 2080 it would be impossible to divert it from its target, they warned in a new research paper.

While the odds may seem long, they are far shorter than that of the asteroid Apophis, which currently has a 1 in 250,000 chance of striking Earth in 2036.

A competition was launched in 2008 by the Planetary Society for designs for a space probe to land on Apophis and monitor its progress.

Maria Eugenia Sansaturio and scientists from the Universidad de Valladolid in Spain have used mathematical models to calculate the risk of the asteroid hitting the Earth anytime between now and the year 2200.

And they were shocked to discover that there are two potential opportunities for the asteroid to hit Earth in the year 2182.

The asteroid is now behind the Sun and will next be observable only in the spring of 2011.

Scientists have estimated and monitored the potential impacts for this asteroid between now and 2200 using two different mathematical models.

But the researchers discovered that the odds increase fourfold by 2080 as the asteroid’s orbit brings it swinging back towards Earth.

Asteroid 1999 RQ36 is part of the Potentially Hazardous Asteroids (PHA) group, which all have the possibility of hitting the Earth due to their orbits and are all considered likely to cause damage.

Even though the asteroid’s orbit is well-known thanks to 290 different observations by telescopes and 13 radar measurements there is uncertainty about its path because of the so-called Yarkovsky effect.

This effect, first discovered in 2003 and named after a Russian engineer, is produced by the way an asteroid absorbs energy from the sun and re-radiates it into space as heat. This can subtly alter the asteroid’s flight path.

The research, which has been published in Icarus journal, predicts what could happen in the upcoming years considering this effect.

Sansaturio said: ‘The consequence of this complex dynamic is not just the likelihood of a comparatively large impact, but also that a realistic deflection procedure (path deviation) could only be made before the impact in 2080, and more easily, before 2060.’

She added: ‘If this object had been discovered after 2080, the deflection would require a technology that is not currently available.

‘Therefore, this example suggests that impact monitoring, which up to date does not cover more than 80 or 100 years, may need to encompass more than one century.

‘Thus, the efforts to deviate this type of objects could be conducted with moderate resources, from a technological and financial point of view.’

The impact from the asteroid that created the famous Chicxulub crater in Mexico would have caused ‘mega-tsunamis’ many thousands of feet high.

It is believed that this asteroid led to the extinction of the dinosaurs.

Scientists around the world have long been discussing ways of deflecting potentially hazardous asteroids to prevent them hitting Earth.

One of the more popular methods is to detonate a nuclear warhead on an approaching asteroid to deflect it from its orbital path.

Last month physicist David Dearborn of the Lawrence Livermore National Laboratory in the US argued that nuclear weapons could be the best strategy for avoiding an asteroid impact – especially for large asteroids and with little warning time.

This entry was posted in Life and tagged cosmos, earth, space. Bookmark the permalink.