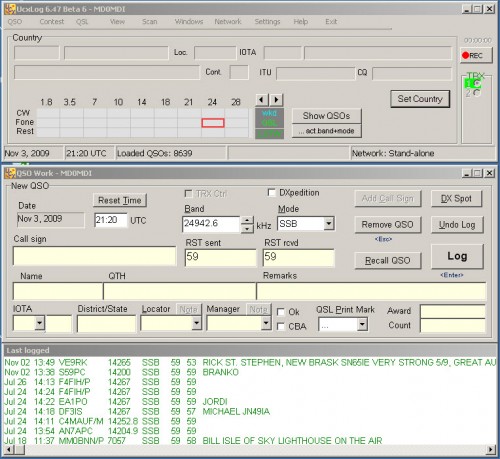 The software itself is so easy to install, the software is only around 6Mb in size and is installed within a few seconds, as for the setup, there is no much to be done, the transceiver interface is basic, and although not as selective as the one that you get with Ham Radio Deluxe it does the job. I had a few problems getting the software to work with some Yaesu radio’s, namely the FT-950 and the FT-897D, I still am not sure what was going wrong, but it took me a few attempts to get the software going, and dropping the baud rate to it’s lowest value helped get these going, which was totally the oppersite for the Kenwood TS-2000, which would not connect to the software until the baud rate was set to 19200bps.

Once the software is installed you get a variety of windows, the basics are above, the main software window (top window), the QSO Working window (middle window) and a basic logbook view (bottom window). These are all resizable and obviously movable to fit all tastes, and positions are saved upon exiting the software to make sure your not having to relay everything out each time. Other windows can be switched on, such as the ever useful DX Cluster and the greyzone map (displayed below). 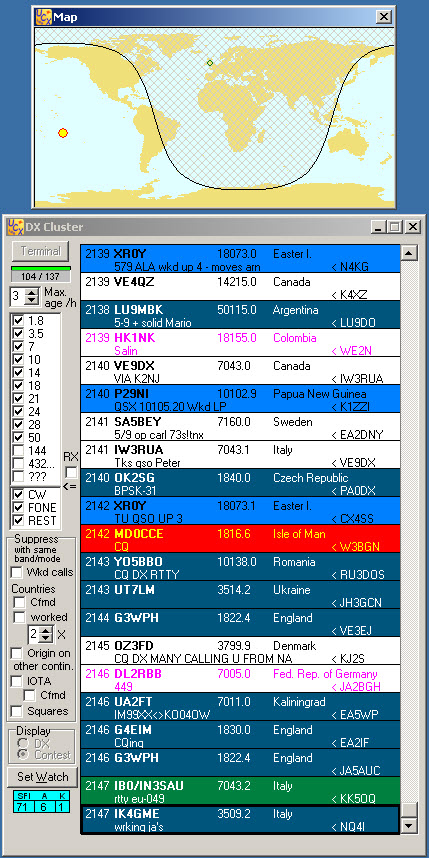 One very nice touch is that you can change the colours within the DX Cluster to suite your own needs, for instance if you want to keep an eye out for special callsigns you can say make the appear in Red as I have above, or if you need certain countries or IOTA contacts you can colour them in different colour, very useful indeed, especially if you loose track of which squares, countries, or islands you have contacted, all of which comes to a totally new meaning when you start working contests.

As an everyday log book, the software does what you need, it does not have all the bells and wistles of the HRD Logbook, but it does the trick. As a contesting logbook it is about the best you could find.

A brief example of the Contest Work Window

Scores and multipliers are updated automatically, all the information that you need is to hand, I would go so far to say that I find it easier to use and just as powerful as N1MM.

The software is basically perfect except for some very annoying little features, or more importantly the lack of some very minor features that make the softweare basically annoying to use, that said it is still worth putting up with it in the hope the programmer will sort it out one day (soon, one hopes).

It is rerally annoying as the softwares interface is fantastic, very easy to use, and everything is in it’s place, for speed of entry I think the software is nearly as good as N1MM, I would even go so far as to say that the interface for UcxLog is so much better than N1MM, and as a non-contest logbook it is 100% better, but still it is very lacking in some major areas, and the very annoying thing here is that most of the features that I (and others that I have shown the software too) wish this software would have in it, are in nearly all other logbook applications out their.

The software seems to be written for just the German market, I say this becasue of some of the missing features, and also what seems to be the lack of interest when it comes to suggestions from anyone not in Germany! pretty typical really, after all when you see a BMW on the roads over here the drivers automatically feel that using the indicators is beneath them or that they have the right to carve up whoever they feel even if there isnt a space for them, Yep I hate BMW’s.

Anyway here is the list that myself and others have thought would turn this software into the most perfect software on the planet!

The frequency is displayed in KHz, and although this is OK, it is so much eazsier to read the frequency in MHz, also there is a lack of acurracy as well, personally when using most other software most of the operators I know like to keep an accurate log, for instance if I log a QSO on say 14.004.015 MHz I will log the entire frequency used, UcxLog will log 14004 kHz, personally we feel that logging what is displayed on the radio itself is a much better way work, What happenes whan you work on 10 GHz, would you rather log 10.226.100 GHz or 10226100000 kHz, which one is easier to read? either way, this would be a fairly easy thing to implement, and could even be switchable, so that if you are German you can have the original version, if you live anywhere else in the world you could log accuratly.
No Support for the Smaller UK Contests:

This year (2010) we desided to test the software on a few of the smaller contests run by the RSGB, these were the the likes of the RSGB 80m Club Championship and a few other smaller contests, it looks like we afre left out of these as well, I have noted that the German small contests of the same ilk are covered but alas not the similar ones run over the UK, for this I am afraid you will need to run N1MM or any of the other contest logging software.

This is only a minor issue, but the software logs just ‘SSB’, and it seems to be a preference that most operators prefere to log ‘USB’ and ‘LSB’, respectivly.

Again a minor issue, but the software logs in UTC and so it should, but most other contesting and logging software allows you to log using a UTC offset time, after all, if logging in a remote island and it is a glorious 10am morning, do you relly want to log 4am instead? although minor, this was the reason the software was dropped by a very well known team of ARRL DX loggers working on one of their well sort after DXpeditions.

The software has a very neat feature, like most of the good logbooks out there it gives you a chance to view the locators that you have worked in a pictorial form (see below). 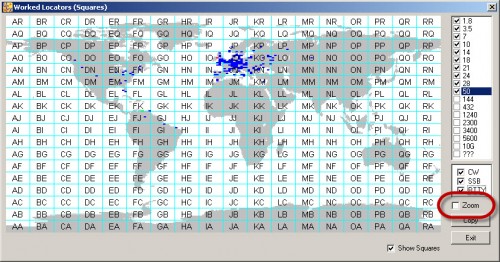 As you can see I have marked a good feature within this dialogue box, and that is to zoom in on the map. 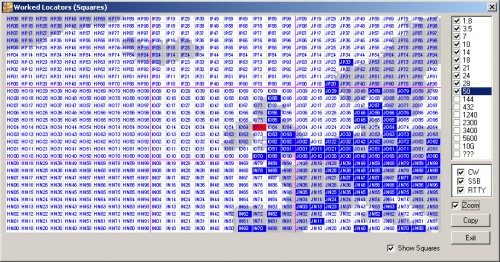 Now for the annoying bit, it only zooms in on your location?! I feel that this is a really missed oppertunity, especially as this could be screen captured for websites, especially for contests or DXpeditions, but you cannot move the map up, down or left and right. most of the othger software out there that has this feature not only allows you to zoom in on set locations but you can also change the amount of zoom to give you an even greater zoomed in area if need be. Well hopefully this will be in a future release (but I doubt it!).

There are a few issues with the bands within the software, such as say 6 metres, in Germany the band stops at 51MHz, but here in the UK it stops at 52MHz, the software is ‘ONLY’ writtern for German operators and thus there is no support for this within the Band Plan, which is slightly annoying, but more annoying that that is the lack of support for 60 metres (5 MHz) and 4 metres (70 MHz), and even after asking about this he feels that there is no need for this as the bands are not supported in Germany.

I have noticed that when entering a Callsign into the ‘Work’ window the Locator and/or the IOTA Number is not automatically entered, even though the information is pulled up with the ‘Callbook’ Window, it often displays the Locator information which is refered to as the ‘Grid Square’ but this information is not placed within the Locator section of the ‘QSO Work’ window, and as for the IOTA Numbers, surely this can be linked to the Callsign Prefixes or Special Callsigns information, it is a little annoying when it does not display the IOTA Numbers for well known Islands such as Crete, Cyprus, I have often needed to add these on the fly, again just a minor inconveinance, but a shame it is missing.

I have had to use a couple of other applications of late, and something that I found very useful was the ability to automatically load the QRZ.com website on say a second monitor, not understanding me? well in Logger32 and a few other application that I have used, you have the ability to load the normal QRZ.com website in your default browser (Internet Explorer or Mozilla Firefox) on a second monitor, the logging software still pulls up the information from QRZ or HamCall for the logbook itself, i.e. the Callsign information, Notes, Locator, Operators name, etc, but as well as this it automatically displays the users QRZ.com webpage within a default browser which can be displayed anywhere, either on the same screen or moved across onto a second monitor which a lot of users now use as the norm. Although not vital, it would prove very useful.

The software is great, it could be ever so easily perfect, but then what software is? the software is updated practically every day, making it constally evolving, it is very stable, and so very fast to use, for contesting, it is near perfect, for general logging, it is in need, but still 95% there. I would still recommend the software to one and all even if the software is written for just the German operators, the ARRL operators that I met just recently were very interested in the software, but were not happy with 2 of the above issues that for them made the software so unlikeable that they stuck with StarLog and other well known software.