The article & Photo copied from Radioworld.com 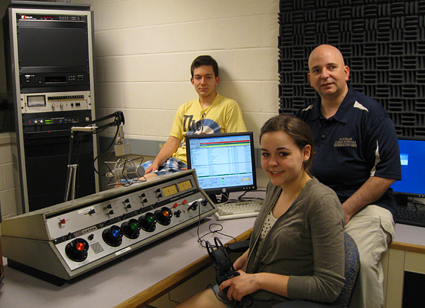 My first dabbling in low-power “broadcasting” occurred in childhood. A Radio Shack P-Box kit, namely a wireless AM microphone, was the start. The study of electronics and my work at a community radio station as a teen soon would benefit my pursuits in the world of commercial broadcast engineering.

Fast-forward two and a half decades. Now a former station chief, I put my talents to use for a local school district.

A high school in the district planned a major renovation. Among many additions were suites not only for a television media center but for a two-studio radio station. A familiar problem emerged: The space had been designed and created with no thought on how to equip it for its intended purpose.Little did I know that this former chief engineer’s renewed interest in low-power broadcasting would be kindled by this project.
Bill DeFelice, right, is shown in studio with students Anna Rae Newland and John Charles Moritz at Brien McMahon High School in Norwalk, Conn. Students named the station ‘McMahon FM.’

With little district funding available, it was up to me to figure a way to build a radio station that would provide students with a real-world, hands-on broadcasting experience. With few affordable alternatives it appeared I would have to opt for a solution in which broadcasting was limited to campus grounds.

I researched the various methods available for low-power radio and found some information online; but much of it lacked specifics regarding campus-limited broadcasting within the confines of the Part 15 regulations. This is what inspired me to develop HobbyBroadcaster.net, which serves as an information hub into which I also merged sister sites CampusBroadcaster.net and BusinessBroadcaster.net.

My research pretty much nailed down the only practical options worth considering for this project. Carrier current allows the injection on an AM signal into the AC power lines within the building. After performing some low-power scale testing, I decided against this. Most kids accustomed to listening to radio would favor FM for music and entertainment, so I opted for installing a radiating coax FM system.

I had procured a small supply of radiating coax from LPB Inc. before that company went out of business. Now I suspended the cable in the ceiling at the center the main school building and fed it with an adjustable 5-watt transmitter.

While I was designing the campus FM installation, the former LPB technical team suggested the use of radiating cable along with a measurement point of 3 meters from the exterior walls of the building. Working within these confines allowed a useable signal within a good distance of the coaxial cable, though I’ll need to extend the run to improve coverage in the outer reaches of the building.

In addition to the FM, I decided on a free-radiating AM transmitter operating under Part 15.221(b)(2), a rule specific to on-campus installations. This would provide a solid signal around the campus, though building penetration is less than optimal.

With the assistance of a couple of local broadcast engineers I was able to confirm and document the field strength of each system using a Potomac FIM-41 for the AM and an FIM-71 for the FM.

The repeating message transmitters used as talking signage by real estate agents are a popular application for low-power AM broadcasting using free-radiating antennas. Several manufacturers offer AM transmitters certified under Part 15 that high schools, colleges and universities have used successfully for campus-limited broadcasting.

Some users choose to go with a kit transmitter, with varying degrees of success. In my experience, kits vary in quality and sometimes it’s difficult to obtain sufficient performance.

Part 15 AM operation with an intentional radiator is regulated by field strength (see the rules, Part 15.209); or you can use a fixed-length radiator and ground, with limited final amplifier input power (15.219).

Some educational institutions still use carrier-current AM, lessening the chance of radiating off their property. On more spacious campuses with multiple buildings, carrier current becomes more expensive. Usually the typical solution consists of additional transmitters or a distribution network with booster amplifiers to service these buildings. Part 15.221 deals with specifics regarding AM carrier current.

Free-radiating Part 15 FM is much less popular. It is nowhere near as generous in providing area coverage. I have seen it used in smaller targeted areas such as health club and sport bar entertainment system installations. I have also seen it used in some houses of worship to provide assistance to the hard of hearing.

Under Part 15.239, operation on the FM band is limited by field strength, specifically 250 µV per meter at 3 meters. Usable coverage is limited but can be increased slightly by reverting to mono transmission.

I have seen businesses use low-power AM or FM to target visitors in parking areas and drive-through lanes. Those who wish to explore the world of low-power broadcasting under Part 15 probably will want to avoid FM; a well-engineered AM installation would provide markedly better coverage.

Many of my website visitors shared why they wanted to explore this option in broadcasting.

Some are simply frustrated with the roadblocks of trying to build a licensed LPFM. Others feel their local broadcast outlets are providing community service that is less than adequate. High schools, colleges and universities aren’t alone in the desire to broadcast as businesses scrutinize other potential methods to reach out to potential customers.

This is just a small sampling of those who have explored the world of legal, low-power, license-free Part 15 radio.

Share your own experiences with Part 15 broadcasting. Write to radioworld@nbmedia.com.

The author is former chief engineer of WMMM(AM)/WCFS(AM) in Westport, Conn., and Webmaster of the site History of Westport Connecticut Radio. His Part 15 site is hobbybroadcaster.net.

This entry was posted in ham and tagged broadcasting, radio. Bookmark the permalink.