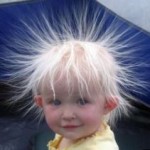 As you sit there reading this story you’re surrounded by electromagnetic energy transmitted from sources such as radio and television transmitters, mobile phone networks and satellite communications systems. Researchers from the Georgia Institute of Technology have created a device that is able to scavenge this ambient energy so it can be used to power small electronic devices such as networks of wireless sensors, microprocessors and communications chips.

Manos Tentzeris, a professor in the Georgia Tech School of Electrical and Computer Engineering, and his team used inkjet printing technology to combine sensors, antennas and energy scavenging capabilities on paper or flexible polymers. Presently, the team’s scavenging technology can take advantage of frequencies from FM radio to radar, a range of 100 Mhz to 15 GHz or higher. The devices capture this energy, convert it from AC to DC, and then store it in capacitors and batteries.

“There is a large amount of electromagnetic energy all around us, but nobody has been able to tap into it,” said Tentzeris. “We are using an ultra-wideband antenna that lets us exploit a variety of signals in different frequency ranges, giving us greatly increased power-gathering capability.”

So far the team has been able to generate hundreds of milliwatts by harnessing the energy from TV bands. It is expected that multi-band systems would generate one milliwatt or more, which is enough to operate small electronic devices, including a variety of sensors and microprocessors. Tentzeris says exploiting a range of electromagnetic bands increases the dependability of energy scavenging devices as if one frequency range fades due to variations in usage, other frequencies can be used to pick up the slack.

The team is also looking at combining the energy scavenging technology with supercapacitors and cycled operation so that the energy builds up in a battery-like superconductor and is utilized once the required level is reached. The team expects this approach would be able to power devices requiring over 50 milliwatts.

The researchers have already successfully operated a temperature sensor using electromagnetic energy captured from a television station that was half a kilometer away. They are now preparing another demonstration in which a microprocessor-based microcontroller would be activated simply by holding it in the air.

The researchers say the technology could also be used in tandem with other electricity generating technologies. For example, scavenged energy could assist a solar element to charge a battery during the day and then at night, scavenged energy would continue to increase the battery charge or would prevent discharging.

It could also be used as a form of system backup. If a battery failed completely, the scavenged energy device could allow the system to transmit a wireless signal while maintaining critical functions.

The Georgia Tech team believe that self-powered, wireless paper-based sensors will soon be widely available at very low cost, making then attractive for a range of applications, such as chemical, biological, heat and stress sensing for defense and industry; radio frequency identification (RFID) tagging for manufacturing and shipping, and monitoring tasks in many fields including communications and power usage.

This entry was posted in ham and tagged tecnology. Bookmark the permalink.