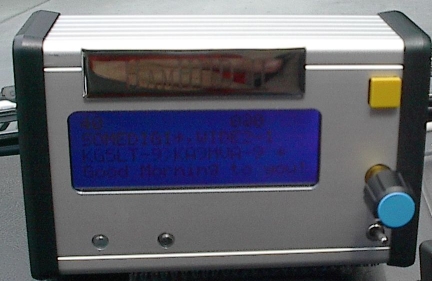 HamHUD began in 1997 as a homebrew device that combined GPS, amateur packet radio (APRS®), an LCD display and driver-friendly user interface, allowing hams on-the-go to text-message and see each other’s positions in real-time. It’s called a HamHUD because it’s intended to be mounted in a “heads-up” position, allowing the ham operator to focus on driving with minimal distractions, while remaining ‘plugged in’ to the network, whether’s it’s tactical or casual.

Since the APRS network has limited bandwidth, HamHUD incorporates SmartBeaconing, the algorithm developed by Tony Arnerich and Steve Bragg that transmits an optimal amount of position information with a minimal amount of QRM to other network users.

Through several kit offerings and years of on-the-road user feedback, HamHUD has evolved into a whole new way of operating ham radio mobile. Operator can exchange positions and operating frequencies digitally with the HamHUD, then get on 2 meter FM or HF for a voice chat. HamHUD assists every aspect of mobile ham radio, from the serious to mundane: storm spotting, public service events, and coordinating rendezvous at the local greasy spoon for an “eyeball QSO”. HamHUDs have been used to talk to the Space Station, and around the world via HF and the APRS Internet network.

HamHUD is now used in North and South America, Europe, and Australia. Over 400 kits and “mini-kits” have been sold, and dozens more were built from scratch.