The WBR – A Simple High Performance Regen Receiver for 40M by N1BYT. 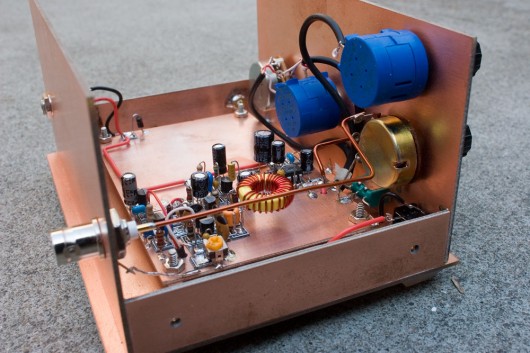 A few weeks ago when a sizable order of parts arrived from Dan’s Small Parts And Kits, the plan was to use them (along with the parts from a few smaller orders from kitsandparts.com and Mouser) as the basis for some fun home-brew projects. I got my feet wet by building some small circuits Manhattan style – an audio filter and RF preamp for my VRX-1 DC receiver, and a crystal oscillator in an Altoids tin to check out the MeSQUARES I had just received from QRPMe. These are detailed in recent posts.

Like anyone who builds circuits, I have a mental list of things that I’d like to build which is updated constantly. Some ideas get pushed to the back of the queue to make way for newer ones, and some stay pretty close to the front for long enough that eventually opportunity and desire collide and magically, it gets made. This is what happened with the WBR regen receiver.

As a teenager growing up in England, I had a one-tube shortwave regen that I built from a kit. It was an HAC Model DX which used a mere handful of components and used a big rectangular 90V battery for the high tension supply. It used plug-in Denco coils for band-changing (I think I remember having 3 of them). I spent countless hours in my bedroom with the high-impedance headphones clamped around my ears, constantly tweaking the regeneration and tuning capacitors and listening mainly to shortwave broadcast stations. I could figure out which band I was on, but had little idea of the actual frequency. It really didn’t matter though, because the likes of Radio Australia, Radio Tirana Albania, Radio Moscow, Radio Nederland’s “Happy Station” shows, Radio Prague and many, many more kept me glued to that little set. It was just a small bent aluminum chassis with 3 variable capacitors, a battery triode, a set of headphones, a coil, 3 fixed resistors and 2 fixed capacitors, but it was pure magic to me.

Exploding components
http://youtu.be/JCPXckfT-6g A real geek stuff : Afroman blows up resistors, electrolytic capacitors and transistors. Don't forget to thumbs up! The music is the final part of Tchaikovsky's 1812 overture.

DIY: Geiger Counter Kit
Description: Commercial Geiger counters can cost hundreds of dollars. With this Geiger Counter Kit you can build your own at a fraction of the price! This easy to solder kit can be built in an evening...

Comment for A Simple High Performance Regen Receiver for 40M

I’m 68 years old, wanted to be a ham since 1956 and finally did it! I have always been interested in simple ways to communicate…not the mega-bucks high power rigs and antennas.

I would like to have a go at your receiver for use with a simple crystal controlled transmitter but have a concern over that 10 turn pot used for tuning. It seems to me that re-finding a frequency would be extremely with such a pot and am wondering if a regular pot and vernier dial might work. Also, I am only interested in the ham part of 40 meters so maybe that might make it work. Would other circuit changes need to be made,

I would appreciate hearing from you regarding this matter.