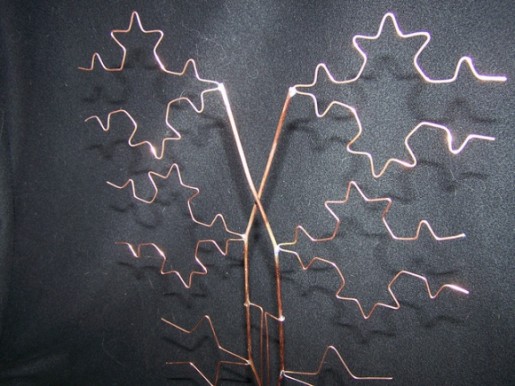 Spotted in the MAKE Flickr Pool, this homemade fractal antenna for digital television signals by Roy Jacobsen of Fargo, ND. Instructions for, and discussions of, similar designs are available in this Instructable from William Ruckman. Judging from the comments over there, folks who have built their own fractal antennae are quite pleased with how they perform. But if you read this, Roy, we’d love to hear it straight from you. Drop us a comment or send me an e-mail and let me know how the antenna is working out for you.

When broadcast TV switched to digital, we tried a few different commercial antennas, but none of them pulled in all of the local stations. I even tried a $100 so-called “omni-directional” one up in our attic that was no better than the cheaper ones.

I then stumbled across a MAKE video that described a DTV antenna made from coat hangers and wire screwed to a piece of scrap plywood.

I figured I wasn’t out much if it didn’t work, so I made one, and by gum, it worked better than any of the commercial models. We still had to move it around to tune in all of the channels, and some days we had trouble with a couple of channels (the local Fox affiliate and PBS were the worst culprits). And it was ugly. But it worked.

I kept looking around for more DIY ideas, and found an instructable for a fractal DTV antenna. The fractal part of the design is that the elements were bent into a second iteration Koch curve (kind of like two-thirds of a Star of David).

Since this design had only four elements where my first attempt had eight, I thought I might do better by combining the two designs. I also decided to replace the coat-hanger elements with some copper wire I recovered from some scrap 12 gauge wire, and the plywood with some ? inch thick clear acrylic. From that, my Fractal DTV Antenna – Version 1 was born.

That gave us a little stronger reception, a more compact design, and better-looking design. However, we still occasionally needed to move it around, turning it one way or another, or sometimes moving it closer to or farther from the TV.

I also wanted to get away from the bolted-together assembly of antenna 2 and give the whole thing a stable base it could stand on. The elements are 18-gauge copper wire, and are soldered on to the 12-gauge vertical connecters. The base is a 5-inch square of ? inch acrylic.

This one works the best; only minor direction adjustments are needed at times. Best of all, my wife actually likes how this one looks.

Do you have a template or design plans for your fractal design?

Do you have a template or design plans for your fractal design?