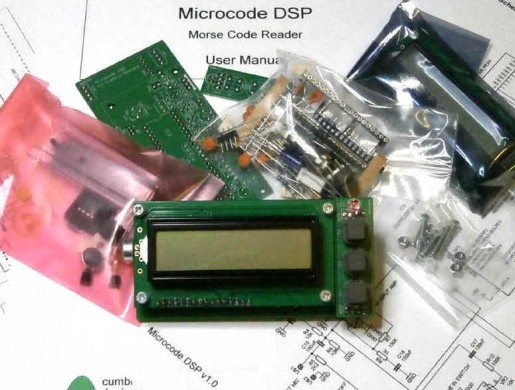 The Microcode kit assembles into a versatile Morse Code reader capable of decoding and displaying audio Morse code signals from speeds of 10 words per minute (wpm) to over 40wpm. A sensitive integral microphone combined with a tunable bandpass active filter allow the Microcode to operate effectively by being placed near to a receiver’s loudspeaker. Alternatively, a line input allows direct connection to the audio output from a receiver. Direct connection of a Morse key is also supported.

All user functions are easily and quickly changed during normal operation using the three front panel push buttons and the Microcode’s intuitive menu system. Microphone or line input gain can be changed on the fly to suit the operating environment using just two of the front panel buttons.

Two display formats allow for both single or dual line display of decoded text on the 16×2 character back lit LCD. In single line mode, the decoded text is displayed on the top line and the average speed in wpm on the bottom line. Two display modes offer fixed or scrolling text. The display backlight has five brightness settings and can be switched off completely to save current when using a battery supply.

Where possible we have also included the International Morse Code non-English extensions to the Microcode’s character set. These cover most of the European alphabets with lower case characters being used to indicate the use of an extended code.

Whilst no automated system can beat the ability of a skilled operator, the Microcode DSP performs remarkably well and will prove a useful tool for both novice or expert.

The Microcode DSP is supplied as a kit and comprises of two PCBs populated with standard through hole parts. The kit is easily assembled by anyone experienced in soldering and having the ability to follow written instructions.

K9AY loops HF Antenna Kit by RemoteQTH.com
The K9AY is terminated loop. It consists of a wire loop of any convenient shape (diamond, delta, etc), hung from a single support and with a ground rod at the bottom. A 9:1 impedance-matching transformer...

W3YY FSK/CW Optically Isolated PC Interface
This page describes an FSK/CW PC interface that will allow a PC to key your transmitter producing either a pure FSK or CW signal. The interface is fully optically isolated and RF filtered. Interface...

I need to know where to get this item and the cost of it. Include shipping cost to Dublin, Republic of Ireland.