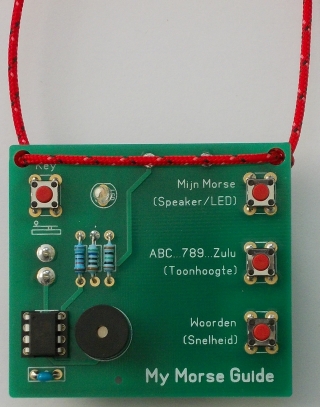 My Morse Guide is an electronics kit aimed at young people.
The kit delivers both some fun in soldering the kit together as well as having a kit for playing with Morse code

My Morse code is a project by Ivo PA1IVO, Leo PA0LEZ and Marianne, and is a successor to the successful Share Your Morse project for the Jamboree On The Air 2013 at Scouting Elfregi Zaanstreek.

It is possible to send Morse code yourself with the kit, or an external Morse key can be connected.

Circuit diagram and further information is at
http://ivok.home.xs4all.nl/electroni…ectronics.html