Most folks think about the earth’s magnetism only when they need to find their way in the wilderness. When we look at a compass, the earth’s magnetic field appears to be a steady guide. But in reality the magnetic field is anything but stable. Ephemeral undulations, called micro-pulsations, ripple about the ionosphere and generate magnetic disturbances that reach down to ground level. Although they are common and sometimes last from seconds to minutes, these magnetic disturbances are hard to detect, having barely one ten-thousandth the strength of the earth’s average magnetism. 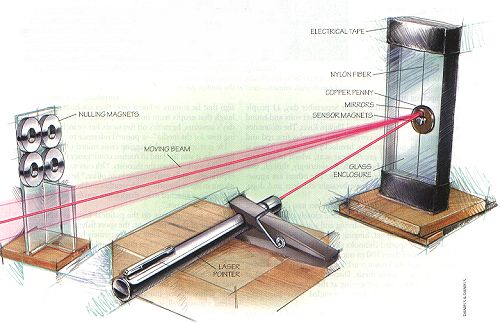 REFLECTED BEAM from this laser pointer will oscillate visibly when the earth’s magnetic field in the horizontal direction varies by even a tiny amount-as it will when ionospheric storms create magnetic micro-pulsations. To investigate the field’s vertical component the equipment must be mounted with the magnets parallel to the ground. (Note: In this diagram the plane of the nulling magnets, which should be parallel to the plane that the penny lies in, has been rotated slightly to provide a better view of the equipment.)

For decades, the high cost of sensitive magnetometers has made tracking these signals the exclusive privilege of professionals. But now, thanks to the creative genius of Roger Baker, a gifted amateur scientist in Austin, Tex., anyone can easily study magnetic micro-pulsations. Baker’s magnetometer costs less than $50, yet it can easily capture those tiny pulsations as well as the occasional dramatic effects of a magnetic storm high in the ionosphere.

Baker’s device employs one of the most sensitive instruments in science. It’s called a torsion balance, and it measures a force by using it to twist a fine filament. The thread gently resists rotation with a torque that grows until it just balances the torque created by the applied force. The resulting angle of deflection, which is found by bouncing a light beam off a small mirror attached to the filament, is proportional to the force under study. With the beam from a laser pointer and a match-head-size mirror, one can in principle resolve deflections as small as one ten-millionth of a degree.

Most professional torsion balances use fine quartz fibers, which are incredibly strong and insensitive to changes in humidity and temperature. Sadly, quartz fibers are difficult for amateurs to come by. But Baker has found that nylon fibers also work quite well. Start with silky, multifilamented nylon twine, which you can purchase at any hardware store, and cut a 30-centimeter (one-foot) length. Next, gently unravel it and use tweezers to selea the finest strands, which should be about 25 microns (0.001 inch) thick.
Baker installs the nylon filament into a simple case made from window glass. Cut two strips five centimetres wide and 15 centimetres long using a glass cutter. (Most hardware vendors sell glass and will also cut it for a nominal fee.) These pieces serve as the vertical walls of the case. Then cut eight glass strips one centimetre wide by five centimetres long and use silicone cement to glue pairs together back to back. Finally, glue one pair of these small glass strips to the top and one to the bottom of each of the longer glass walls. The smaller pieces will act as spacers between the walls.

‘When the glue sets, cover the horizontal spacers of one of the walls with a layer of stretchy, black vinyl electrical tape. The rape prevents the glass from cuffing the fiber. Next, lay one end of the fiber across the center of the top spacer and tack it in place with a small dollop of epoxy; secure it with another strip of tape. The epoxy will keep the thread from slipping over time.
Baker generates the necessary tension in the fiber by dangling four nickels attached temporarily to the end. He then epoxies and tapes the lower end of the thread into place against the bottom spacer, locking in the tension.

To coax the nylon to twist in response to minute changes in the ambient field, you need to affix a powerful magnet to the fiber. Because a large and massive magnet responds only sluggishly, the ideal attractor would possess a powerful field and yet be extremely lightweight. Such magnetic miracles exist; they are called rare-earth magnets because they contain rare-earth elements, such as samarium. These marvels are tiny and yet harbor at their surface magnetic fields that are 10,000 times stronger than the earth’s. Best of all, you can pick up a pair of them at any Radio Shack for less than $2 (part number 64-1895).

Deposit a thin smear of silicone cement on one rare-earth magnet and sandwich the filament between the two of them. Make sure that they overlap each other completely and are perfectly centered on the fiber as the glue hardens. Baker fashioned the reflector from a small vanity mirror. With a glass cutter he cut 1.5-millimeter-square chips, which he cemented togethe; back to back, centered on the fiber just above and in contact with the rare-earth magnets. The mirror and magnets will then rotate as a well-balanced unit. Baker notes that the instrument will work better if you use the reflective surface on the back of the mirror to reflect light, which avoids the possibility that passage through the glass will distort the beam. To remove the lacquer that covers the reflective coating, use a Q-Tip to rub a little MAGNETS methyl ethyl ketone (MEK) on the back surface. If you would rather not work with a potentially toxic chemical, then install the mirrors in the usual way, with light passing through the glass.

Baker next glues a solid-copper penny (one minted before 1982, when the purity of the metal was still high) to the glass, just behind the magnets. ‘When the magnets move, they induce electrical eddy currents in the copper that in turn produce their own magnetic fields, which oppose the motion of the magnets. Baker’s clever trick quickly damps unwanted oscillations, making the magnetometer much easier to read.

Next, encase the sensor by gluing the second glass wall with its spacers on top of the first and then seal off the sides with black electrical tape to protect your magnetometer from pesky air currents. Mount the entire assembly vertically to a smooth flat base. 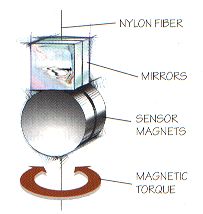 Your sensor is now an accurate compass. As you walk around, the magnets should align to magnetic north and display little oscillation.

MIRROR pieces and a pair of powerful magnets attached to a nylon fiber rotate in response
to changes in the magnetic environment.

Because the earth’s relatively large field absolutely overwhelms the coveted magnetic micropulsations, you must first null the instrument before it will register signals from the ionosphere. Baker’s procedure for doing so requires another trip to Radio Shack to acquire four doughnut-shaped magnets (part number 64-1888). Attach them side by side to a small piece of glass or wood using silicone cement. (Note that you’ll need to use small clamps to hold them in place against their mutual magnetic repulsion until the glue sets.) Turn the array of doughnut magnets upright and cement it to a free-standing base so that the center of the assembly aligns with the rare-earth magnets in the sensor.

As the nulling magnets are brought close to the magnetometer (approximately 30 centimetres), the sensor will begin to wobble and then rotate quite freely when the combined forces of the earth’s magnetic field and those of the doughnut magnets almost cancel each other out. The period of the oscillations should lengthen to a second or more when all the forces are nearly balanced. In this configuration the magnetometer will be the most sensitive.

The bright beam of a laser pointer completes the instrument. (Radio Shack sells one pointer for less than $30.) Position the laser so that the beam shines through the glass case and bounces off the mirror and onto a distant wall. Ripples in the earth’s magnetic field will show up as deflertions of the beam.

Although at this point you’re ready to do real science, Baker has improved the device further. By wrapping wire onto a rolled-oats container, he has fashioned a pair of coils to calibrate his creation. He uses the so-called Helmoltz arrangement of two circular coils (ones separated by half their diameter) to make the magnetic field in the center uniform. Such Helmholz coils can also be combined with photocells and electronic feedback to keep the laser beam fixed as the earth’s field changes. Measuring the current needed to null the signal in this way shows the size of the magnetic fluctuations. Using a computer to monitor the current will produce a stream of measurements that you can record and later analyze.

For more details about this project, visit the Web forum hosted by the Society for Amateur Scientists at < http://web2.thesphere.com/SAS/WebX.cgi >. You may also write the society at 4735 Clairemont Square, Suite 179, San Diego, CA 92)17.

Exploding components
http://youtu.be/JCPXckfT-6g A real geek stuff : Afroman blows up resistors, electrolytic capacitors and transistors. Don't forget to thumbs up! The music is the final part of Tchaikovsky's 1812 overture.

DIY: Geiger Counter Kit
Description: Commercial Geiger counters can cost hundreds of dollars. With this Geiger Counter Kit you can build your own at a fraction of the price! This easy to solder kit can be built in an evening...