54th anniversay of the space age

During the aftermath which followed the shock of Sputnik, America sought answers and explanations. Various targets for blame included lack of science and math education, inter-service military rivalries, and postwar American complacency as a self-regarded world leader in technology, politics and emerging cultures. Our consumer culture and materialism were also to blame. American obsession with standards of living and consumer-driven preoccupations with perfection, previously seen as signs of superiority over the Russians were now seen with a new kind of hollowness, under the shadow of someone else’s orbiting satellite. While they worried about teeth stains and frozen peas with the perfect shape, size and color (see below), while they sought increasingly dramatic tail fins and perfect bedsprings, the Russians were building their Sputniks and the powerful rocket to launch them. The material wealth which was a pride of the United States in the postwar era, instantly felt like a false prophet and its preoccupation with materialism was somehow seen as being connected to its loss of scientific and technical superiority. 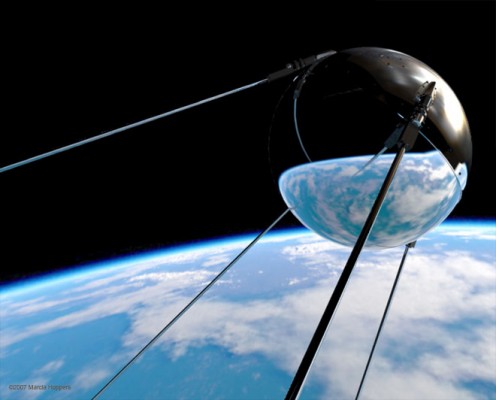 Radio Amateurs will be celebrating the 54th anniversay of the space age by operating 21.060 MHz transmitters based on old Russian tubes (valves) of the same type used in the first Sputnik satellite in 1957.

Sputnik was the first artificial satellite to be put into Earth’s orbit. Launched on October 4, 1957 its signals on 20.005 and 40.002 MHz were monitored by amateur radio operators throughout the world.

Roger G3XBM has already had a successful transatlantic contact using a 400mW output transmitter based on the Sputnik valve. With an Andrew’s inverted-L antenna he worked Ed K1GDH near Cambridge USA who was running 5W and received a 539 report.

On the G-QRP Yahoo group Oleg RV3GM / KH6OB writes:
R3DAU and RN3AUS informed they are finished “replica” of Sputniker TXs used original valves (TNX to Mike AA1TJ!). Some guys will operate in Sputnik Party using any possible radios with 1 watt power on 21060.

Yuri UA1CEG informed he will use old military receiver R-399 with home brew additional transmitter unit. So, the old valves RX became a transceiver. Me, I will operate FT-817 (1 watt) in home or suburban garden-house positions using a simple wire antennas.

Hope to collect a lot of interesting photos, logs and soapboxes from Sputnikers.