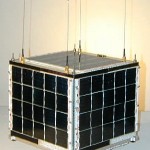 While many in North America were fast asleep Monday morning, March 1, the AMSAT-OSCAR 51 satellite had a potentially dangerous encounter with another spacecraft known as Formosat 3D. OSCAR 51 is a popular Amateur Radio satellite that often functions as a crossband FM repeater, relaying brief conversations over hundreds of miles. Formosat 3D is part of a constellation of six remote sensing microsatellites that collect atmospheric data for weather prediction and for ionosphere, climate and gravity research. Both orbit at an altitude of approximately 500 miles.

On Sunday evening, AMSAT-NA Vice President of Operations, Drew Glasbrenner, KO4MA, received an e-mail alert from the US Joint Space Operations Center, warning of the close approach between Formosat 3D and OSCAR 51 that would take place the following morning. “There is really nothing we can do other than watch and try to collect telemetry,” Glasbrenner said. “Of course, any contact would mean instant death for OSCAR 51. It’s all predictive until they smack together, but the estimate was that they would come within 2900 feet overall, but only 130 feet radially. I’m visualizing that scenario as one car merging on a highway at 17,500 MPH with another car 2900 feet in front and 130 feet to the left or right. Scale the 17,500 MPH to 70 MPH and the distances in the analogy would be 12 feet in front and 6 inches abreast, just to put the velocity and distances in perspective!”

Glasbrenner was awake early Monday morning to monitor OSCAR 51’s telemetry as the close approach unfolded. At 1056 UTC, he determined that the satellite was still alive, having survived the encounter without a scratch. “We were all relieved that OSCAR 51 was fine,” Glasbrenner said, “but it reinforces how tenuous our satellite presence is, and the fact that we should be constantly working and fundraising to build and launch new satellites.”