A Guide to Ham Radio

Can Ham Radios Really Talk to Space? And Other Answers.

Communicating with someone in space is just one of the attractions of ham radio, a hobby in which operators communicate with others in distant places, using frequencies that the Federal Communications Commission (FCC) and other regulatory agencies around the world allocate for use by amateurs. To be a ham radio operator in the U.S., all a person needs is to obtain some inexpensive equipment—beginning sets cost less than $200—and pass an FCC licensing exam to demonstrate basic knowledge and an understanding of government regulations.

There are more than 600,000 ham radio operators in the U.S. alone and about 2 million worldwide, according to the website of the American Radio Relay League (ARRL), an association that has been promoting ham radio for more than a century. (Interestingly, according to one census of ham radio operators, the country with the most enthusiasts is Japan, with about 1.3 million. The U.S., Thailand, South Korea, and Germany round out the top five.)

“Amateur Radio operators come from all walks of life—doctors, students, kids, politicians, truck drivers, movie stars, missionaries and even your average neighbor next door,” explains a primer on the ARRL website. 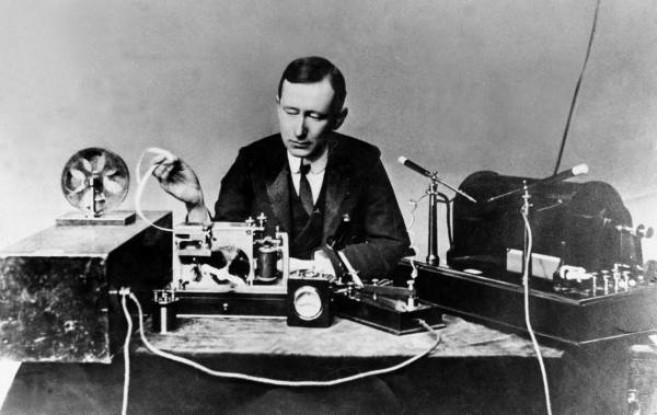 Electrical engineer/inventor Guglielmo Marconi with the spark-gap transmitter (right) and coherer receiver (left) he used in some of his first long distance radiotelegraphy transmissions during the 1890s. LIFE Photo Archive

Ham radio dates back to the late 1800s and early 1900s. Around the time that an Italian inventor Guglielmo Marconi pioneered wireless communication and used high-powered transmitters and giant antennas to communicate across the Atlantic Ocean for the first time, amateur tinkerers figured out how to build smaller, low-powered radio transmitters and receivers that could communicate over distances of as much as 100 miles.

In those days, radio communication was unregulated and largely chaotic. Amateurs sometimes jumped onto frequencies used by commercial or government stations and essentially jammed them—a phenomenon which led the professionals to deride the amateurs as “hams.” That name stuck, though over time it lost its negative meaning.

In 1912, Congress passed a law reserving longer wavelengths for professional communication, and restricted amateurs to shorter wavelengths that experts considered to be of little value for long-distance communication. But the amateur radio operators figured out an ingenious way to get around that hindrance. They organized themselves into networks and helped each other by relaying signals, which allowed them to stretch their capabilities. They got another boost from an inventor named Edwin H. Armstrong, who developed a receiver with vacuum tubes that was far more sensitive than the crystal sets that amateur operators were using at the time.

In the decades that followed, ham radio continued to grow. The 1950s saw the advent of transistors and other technology which gave amateur radio sets more capabilities, and in the 1960s, they began to extend their range by using small satellites such as OSCAR (Orbiting Satellite Carrying Amateur Radio) that NASA had launched into orbit to assist them. They also increasingly began repurposing old equipment from FM commercial radio stations to set up repeaters—basically, relay stations, usually located on buildings or hillsides, which receive signals from amateur operators and re-transmit them on different frequencies with higher power.

Unlike commercial or government radio stations, ham enthusiasts don’t have to stay on the same fixed frequency all the time. Instead, they can jump around within the part of the radio spectrum that’s allocated to amateurs, and utilize any channel that’s clear at the time. As an ARRL primer explains, operators use call signs—such as “RickKU0W” or “Gayle KG7ZZZ” to identify themselves and establish communication with other hams.

Since they have to share the networks and frequencies that allow them to communicate, ham radio operators are big on etiquette.

If an operator is looking for another specific operator, they’ll call out something such as: “W1AW (the station you want to contact), this is KC2ABC, Kilo Charlie Two Alpha Bravo Charlie, over.” If the person doesn’t respond, an operator can keep trying on that channel. When the operator is done, he or she will utter a message such as “This is KC2ABC clear” to inform other operators who may want to use the channel that it is available.

Since they have to share the networks and frequencies that allow them to communicate, ham radio operators are big on etiquette. As the website of one amateur radio club explains, “nothing is more annoying than someone that ‘keys up’ in the middle of another conversation without first checking to make sure the repeater is free. If the repeater is in use, wait for a pause in the conversation and simply announce your call sign and wait for one of the other stations to acknowledge your call.”

Ham radio continues to thrive, even in the age of the Internet and mobile phones. As a recent Ars Technica article noted, ham radio has survived wars, dictatorships, and even natural disasters that disrupt other communications systems. The medium’s appeal is that it remains free, non-commercial and largely organized and controlled by users, and that it allows people to communicate with others all over the planet—and even in space.