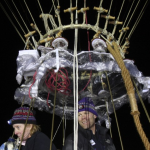 The bodies of famed hot-air balloonist Richard Abruzzo, KC5VWK, of Albuquerque, New Mexico, and a companion were discovered on Monday, December 6 deep underwater off the coast of Vieste, Italy. Abruzzo, 47, and Carol Rymer-Davis, 65, of Denver, Colorado, had been missing since September 29 when they lost contact with officials during a balloon race, after their balloon made a rapid descent during rough weather.

According to CNN, race organizers of the 54th Gordon Bennett Gas Balloon Race said in an October statement that the balloon appeared “to have suffered a sudden and unexpected failure,” but it was still investigating what caused the balloon’s plunge. Upon discovery of the remains, race director Don Cameron told the BBC that it was “very sad news, but it was of course expected. It will give closure to the families. Having absolutely no information at all has been very distressing for them.”

The Abruzzo name is well known ballooning circles. Abruzzo was the son of famed balloonist Ben Abruzzo, who was in 1981 part of the first team to cross the Pacific Ocean by balloon. He was killed in a small airplane crash in 1985. The younger Abruzzo and Davis won the 2004 edition of the Gordon Bennett race and the 2003 America’s Challenge gas race, one of Richard Abruzzo’s five victories in that race. The Gordon Bennett race — sponsored by Richard Branson — challenges participants to travel the farthest distance possible on a single tank of hydrogen.

Amateur Radio and ballooning share a rich history. In 1977, Massachusetts hams provided communications support to the Double Eagle — a hot air balloon attempting a transatlantic crossing — by relaying weather updates from the tracking center in Bedford, Massachusetts to the launch site in Marshfield, about 30 miles away. The Double Eagle reached as far as Iceland before deteriorating weather forced it down.

The next year, the Double Eagle II succeeded in crossing the Atlantic, again with the help of Amateur Radio. Flight Director “Doc” Wiley, W5OPC, along with Communications Director Sydney Parks, WA5KGQ, and Technical Director Dr Richard Schwoebel, WB5OJO, all played key roles in planning the project. They installed Amateur Radio equipment — including a 20 meter vertical dipole — on board to be used as a backup for the commercial frequencies. As it turned out, the crystal-controlled sideband gear on the commercial radios malfunctioned, making the craft unable to send important navigation, position and safety information while over open water at 25,000 feet. With the commercial equipment out of commission, the crew relied on the ham equipment to send and receive communications.

Abruzzo is survived by his wife Nancy, a son and a daughter. — Thanks to CNN, The AP, the BBC and KRQE in Albuquerque, New Mexico for the information.