Île Amsterdam (French pronunciation: ​[ilamstəʁˈdam], also known as Amsterdam Island, New Amsterdam, or Nouvelle Amsterdam, is an island named after the city of Amsterdam in the Netherlands. It lies in the southern Indian Ocean. It is part of the French Southern and Antarctic Lands and, together with neighbouring Île Saint-Paul 85 km (53 mi) to the south, forms one of the five districts of the territory. Its base, the Martin-de-Viviès research station, first called Camp Heurtin, then La Roche Godon, and the only settlement on the island, is the capital of the territory and is home to about 30 non-permanent inhabitants involved in biological, meteorological and geomagnetic studies.

The island was discovered by the Basque Spanish explorer Juan Sebastián Elcano on 18 March 1522, in the course of his voyage of global circumnavigation. However, he did not name the island. Having found the island unnamed, Dutch captain Anthonie van Diemen named it Nieuw Amsterdam after his ship on 17 June 1633. The first recorded landing was made in December 1696 by Dutchman Willem de Vlamingh.

French Captain Pierre François Péron says he was marooned from 1792 to 1795 on the island. Peron’s Memoires, in which he describes his experiences, were published in a limited edition which is an expensive collectors’ item. There was confusion in the early days between Amsterdam and Saint Paul Islands. In February 1793 Sir George Staunton on his way to China on board the H.M.S. Lion found a sealer named Perron and four others on the southern of the two islands, now called Saint Paul Island.

In Autumn 1833 the British ship Lady Munro was wrecked at the island and 21 survivors were picked up two weeks later by a sealing vessel.

In January 1871 an attempt to settle the island was made by a party led by Heurtin, a French resident of Réunion Island. After seven months there, their attempts to raise cattle and grow crops were unfruitful and they returned to Réunion, abandoning the cattle on the island.

The islands of Île Amsterdam and Île Saint-Paul were first claimed by Martin Dupeyrat for France in 1843. However, the governor of Réunion refused to ratify the act of possession and France took formal control only in October 1892.

The islands were attached to Madagascar in 1924 and became a French colony. The first French base on Amsterdam was established in 1949, and was originally called Camp Heurtin. The Global Atmosphere Watch still maintains a presence on Amsterdam.
Territorial claims

Amsterdam island, along with Saint Paul Island, is considered by some Mauritian parties as a national territory. The question of Mauritian sovereignty over the two islands was raised in 2007 by the leader of the opposition, Paul Raymond Berenger. This new claim could be raised in discussions with France, along with a claim to Tromelin Island which has been officially maintained for a long time. 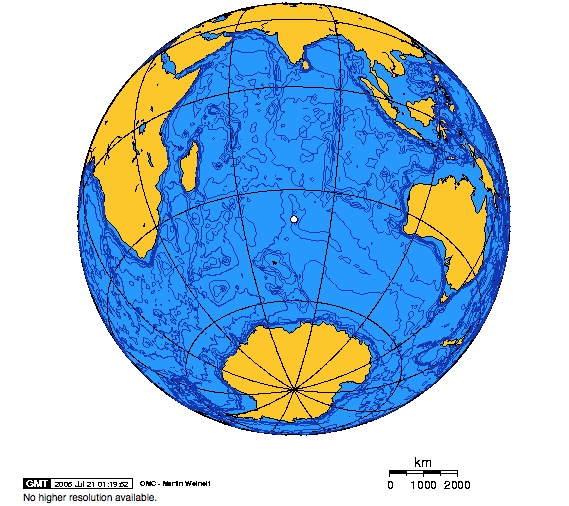 The volcanic island is a potentially active volcano which last erupted in 1792. It has an area of 55 km2 (21 sq mi), measuring about 10 km (6.2 mi) on its longest side, and reaches as high as 867 m (2,844 ft) at the Mont de la Dives. The high central area of the island, at an elevation of over 500 metres (1,600 ft), containing its peaks and caldera, is known as the Plateau des Tourbières (in English the Plateau of Bogs). The cliffs that characterise the western coastline of the island, rising to over 700 metres (2,300 ft), are known as the Falaises d’Entrecasteaux after 18th century French navigator Bruni d’Entrecasteaux.