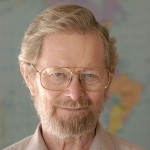 Around 5:30 on the morning of October 6, George E. Smith, AA2EJ, of Barnegat, New Jersey, got a phone call that changed his life: He had just found out he had won the Nobel Prize in Physics for 2009 “for the invention of an imaging semiconductor circuit — the CCD sensor.” Smith will share the prize money with two other recipients: Charles K. Kao, of Standard Telecommunication Laboratories in the United Kingdom and Chinese University of Hong Kong in Hong Kong, China, and Willard S. Boyle, of Bell Laboratories. Each recipient will receive a diploma, a medal and a document confirming their share of SEK $10 million (about $1.4 million US dollars); Kao will receive 50 percent, while Smith and Boyle will each receive 25 percent of the monetary award.

Kao was recognized by the prize committee for his “groundbreaking achievements concerning the transmission of light in fibers for optical communication.” His discoveries paved the way for optical fiber technology, used for almost all telephony and data communication today. Boyle and Smith invented a digital image sensor — the CCD — that has become an electronic eye in almost all areas of photography.

“Amateur Radio has always attracted individuals who want to understand and exploit nature’s laws,” fellow Nobel Laureate Joe Taylor, K1JT, told the ARRL. “These are essential characteristics for first-rate scientists, as well. The 2009 Nobel Prize in Physics honors the invention of an imaging semiconductor circuit — the CCD sensor used in digital cameras, the Hubble Space Telescope and many other scientific and consumer devices. It was no great surprise to learn that one of the Laureates, George Smith, is also a radio amateur.” Taylor was awarded the Nobel Prize in Physics in 1993 “for the discovery of a new type of pulsar, a discovery that has opened up new possibilities for the study of gravitation.”

Smith earned his PhD from the University of Chicago in 1959 with a dissertation of only three pages, which he later described as “short, but pretty good.” Like Boyle, Smith was a serious sailor and the two took many sailing trips together. After his retirement, Smith sailed around the world for 17 years, according to an interview he gave to the Adam Smith, Editor-in-Chief of the Nobel Foundation’s official Web site; he only gave up sailing in 2001 to spare his “creaky bones” from further storms.

“As you know, we sailed around the world for 17 years,” Smith told the ARRL. “While we were on our boat, we used Amateur Radio, especially in the South Pacific. My wife Janet, AA2EI, was the principal radio operator. With our radio, we could keep track of other boats in the area. Over in the Southwest Pacific, there are shore stations that provide weather forecasts every day on the ham radio. We would listen for these, as it was such a tremendous help for us as sailors. Janet and I haven’t really been on the radio since we got back to the US in 2003. The boat’s out stuck behind our house; we have a dock back there.”

The CCD — invented in about an hour over lunch when Smith and Boyle worked together at New Jersey’s Bell Labs — was, according to Wired Magazine, the first practical way to let a light-sensitive silicon chip store an image and then digitize it. In short, it is the basis of today’s digital camera.

According to Wired, the “most amazing thing about the invention” is that Boyle and Smith came up with the design so quickly. With Bell Labs threatening to take the funds from their department and transfer the money to other research, Boyle had to come up with a competing semiconductor design. He got together with Smith, and within an hour, they came up with the idea and sketched it all out on a blackboard.

“One morning in October, 1969,” Boyle wrote on his Web site, “I was challenged to create a new kind of computer memory. That afternoon, I got together with George Smith and brainstormed for an hour or so on a new kind of semiconductor device, drawing a few sketches and equations on a blackboard. We called it a charge-coupled device: A ‘CCD.’ When we had the shops at Bell Labs make up the device, it worked exactly as expected, much to the surprise of our colleagues.”

For their invention of the CCD, Smith and Boyle have also jointly received the Franklin Institute’s Stuart Ballantine Medal in 1973, the 1974 IEEE Morris N. Liebmann Memorial Award and the 2006 Charles Stark Draper Prize.

When asked by the ARRL how he felt about winning the Nobel Prize, he exclaimed, “I feel great! Even though there’s a lot of nonsense to go through with it, it’s worth it and winning it does wonders for your ego. Aside from the initial shock and having to go through piles of mail, e-mail and returning telephone calls, I know that will calm down. As for the long-range future, I’m getting many invitations to give talks. Next year, I’ve been invited to speak at a major conference in Seoul, South Korea, another in Portland, Oregon and another in Switzerland. I’ve been invited to France to give a talk, China, too. We need to sit down with a calendar and figure it all out. Having a Nobel makes a big dent in your lifestyle.”

Smith told the ARRL that he knew the CCD was under consideration for the Nobel Prize, “but we didn’t know exactly if, or when, it would happen. Research that wins the Nobel is often done many years beforehand. In my case, this was 40 year old research. The Prize Committee wants to make sure the research has stood the test of time.

Next month, Smith will travel to Stockholm, Sweden for the award ceremony on December 10. It is certain that his picture will be taken scores of times by the international media, made possible through the technology that he and Boyle pioneered.

What Is a CCD?

In most solid-state applications, a CCD translates light into an electronic signal. The sensor is made up of pixels, each of which is a metal-oxide semiconductor (MOS) capacitor. As the light falls on each pixel, the photons become electrons due to the photoelectric effect, the same thing that produces solar power. The photoelectric effect happens when photons of light hit the silicon of the pixel and knock electrons out of place. On a CCD, these electrons are stored in a “bucket”: the pixel’s capacitor.

At this stage, the “image” is still in analog form, with the charge — or amount of electron in the bucket — on each pixel directly corresponding to the amount of light that has hit it. The genius of Boyle and Smith’s CCD was the reading of the information stored. Essentially, the charge in each row is moved from one site to the next, a step at a time. This has been likened to a “bucket row” or human chain, passing buckets of water down a line. As these buckets of electrons reach the end of the line they are dumped out and measured. This analog measurement is then turned into a digital value. Thus, a digital grid is made that describes the image. That signal can be digitized and transformed by the dull magic of high-performance computing into images from the Hubble Space Telescope (HST).

The image from a CCD, such as the ones on the HST, is black and white. For television and photographic media, placing a red, green or blue colored filter over the top of each pixel allows color information to be read directly from each pixel — but only for one primary color per pixel. Subsequently, software can also extrapolate the color of adjacent pixels based on their brightness so that each pixel winds up with its own red, green and blue values.

CCDs: Not Just for Your Digital Camera

The advantages of the electronic image sensor quickly became evident. In 1970, just about a year after the invention, Smith and Boyle could demonstrate a CCD in their video camera for the first time. In 1972, an American company constructed the first image sensor with 100?100 pixels and entered production a few years later. In 1975, Boyle and Smith themselves constructed a digital video camera of a sufficiently high resolution to manage television broadcasts. It would not be until 1981 before the first camera with built-in CCD appeared on the market. Its bulky and primitive characteristics when compared to contemporary cameras initiated a more commercially oriented digitalization in the field of photography. Five years later in 1986, the first 1.4 megapixel image sensor (1.4 million pixels) arrived. Nine years later in 1995, the world’s first fully digital photographic camera appeared. Camera manufacturers around the world quickly caught on, and soon the market was flooded with ever smaller and cheaper products.

No one initially predicted that the CCD would become indispensable to the field of astronomy. But it is precisely thanks to digital technology that the wide-angle camera on the HST can send the most astonishing images back to Earth. The camera’s sensor initially consisted of only 0.64 megapixels 800?800 pixels); however, as four sensors were interconnected, they provided a total of 2.56 megapixels. This was a big thing in the 1980s when the Hubble was designed. Today, the Kepler satellite has been equipped with a mosaic sensor of 95 megapixels, and the hope is that it will discover Earth-like planets around stars other than the Sun.

Early on, astronomers realized the advantages of the digital image sensor. It spans the entire light spectrum, from X-ray to infrared. It is a thousand times more sensitive than photographic film. Out of 100 incoming light particles, a CCD catches up to 90, whereas a photographic plate or the human eye will only catch one. In a few seconds, light from distant objects is gathered — a process that previously would have taken several hours. The effect is also directly proportional to the intensity of the light — the larger the amount of light, the higher the number of electrons.

For the really dim things astronomers look at, the number of photons of light coming from a source is so small that each one counts. Out of every 100 photons, a CCD can record more than 90 of them. Photographic plates can barely reach 10 percent. And your eyes? Their quantum efficiency is in the 1-4 percent range.

In 1974 the first image sensor had already been used to take photographs of the moon — the first astronomical images ever to be taken with a digital camera. With lightning speed, astronomers adopted this new technology; in 1979 a digital camera with a resolution of 320?512 pixels was mounted on 2.1 meter telescope at Kitt Peak National Observatory (KPNO), just outside Tucson, Arizona.

Today, whenever photo, video or television is used, digital image sensors are usually involved in the process. They are useful for surveillance purposes both on Earth and in space. CCD technology is also used in a host of medical applications, such as imaging the inside of the human body — both for diagnostics and for surgical operations. The digital image sensor has become a widely used instrument at the service of science both at the bottom of the oceans and in space. It can reveal fine details in very distant and in extremely small objects. In this way, technological and scientific breakthroughs intertwine.

Smith and Taylor are not the only radio amateurs to receive the Nobel Prize in Physics. Sir Martin Ryle, FRS, G3CY (SK) shared the 1974 Nobel in Physics with Anthony Hewish “for their pioneering research in radio astrophysics.” Ryle received his for inventing the aperture-synthesis technique for radio astronomy (interferometry); Hewish received his for his decisive role in the discovery of pulsars. Guglielmo Marconi — who always considered himself an “amateur” — shared the 1909 Physics prize with Karl Ferdinand Braun “in recognition of their contributions to the development of wireless telegraphy.” This, at a time when there were no licenses and only amateurs. — Thanks to Wired Magazine and the Nobel Foundation for information.