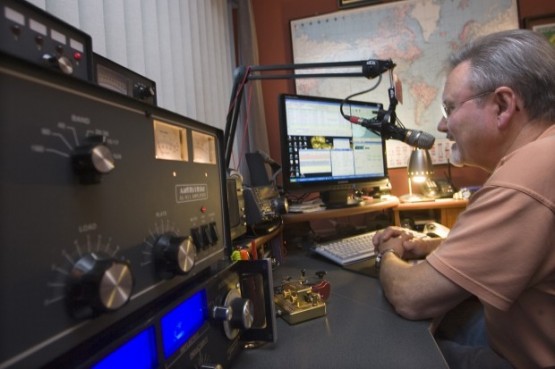 WALLINGFORD – In the afternoons, the den of Paul Ciezniak’s home has a way of sounding like an aquarium. It’s the low humming, and a kind of gurgling, emitting from his ham radio equipment. It’s the faint sound of Morse code, with the volume turned low. As Ciezniak adjusts a dial, the sound can leap into a modulation that reminds you of science fiction movies from the 1950s.

The equipment is connected to a dipole antenna in his back yard, stretched 45-feet high and across two trees 100 feet apart. With that, he can talk with people around the world using the airwaves.

Afternoons are a good time for Ciezniak to communicate with Europe and beyond. On a recent afternoon, he held a quick chat with a ham, or amateur radio operator, in Russia. The conversation, conducted using Morse code, was brief and friendly, exchanging call signs (Ciezniak’s is K1SEZ), information about location, the weather, and the equipment they were using. This type of conversation is called rag chewing by amateur radio enthusiasts. It means getting in touch with someone you don’t know and chatting.

A little later, Ciezniak was rag chewing with Amelia, from Michigan. Pretty much the same information was exchanged, but this time it was done using a microphone, with the human voice.

For contacting people all over the world, though, Ciezniak usually uses the universal language of dits and dahs, Morse code, which hams call CW, for continuous wave. Ciezniak says he has communicated with fellow hams in 236 countries.

Knowledge of Morse code is no longer a requirement of the Federal Communications Commission for earning a ham radio license. But it retains considerable appeal to many enthusiasts.

“Morse code, to me, is just the charm of it all,” Ciezniak said.

“I think even some of the new hams who get a licenses learn that it’s an interesting and fun mode of communication,” said Bill Wawrzeniak, former president of the Meriden Amateur Radio Club, of which there are about 70 members.

Another advantage to using Morse code is that it has a way of getting through when communication conditions are challenging and voice contact breaks up. That said, fewer than half of the nearly 700,000 hams in the U.S. regard themselves as Morse code operators, according to Ciezniak.

Ciezniak uses a straight telegraph key, the type widely used during World War II. You could get one for about $1 in those days. The system is simple. The signal is on when the key is pressed, off when it’s released. The dots and dashes are controlled by the timing and length of the on-off motions.

With that tool, Ciezniak can communicate at up to 25 words a minute.

Ciezniak has grandchildren who have helped him learn how to text message on his cell phone. “They do it all the time,” he said.

Ham radio is two-way communication, which means you have to alert the person on the other end that you’re finished with what you have to say and that it’s his or her turn. So it would seem to be a method of communication that would take a lot longer than a cell phone text. But there is at least anecdotal evidence that Morse code can be done just as quickly as the newfangled way.

A few years ago, “The Tonight Show with Jay Leno” pitted two youngsters and their text messaging cell phones against experienced Morse code operators to see who could transmit a silly message (“I just saved a bundle …”) the quickest. The Morse coders, using technology more than 160 years old, beat out the technology that dates to the last minute.

The international continuous wave method of communication, or Morse code, owes its roots to the electric telegraph developed by Samuel F.B. Morse in 1832. It was a way of text messaging on the telegraph paper tape. When Italian physicist Guglielmo Marconi transmitted the first wireless communication across the Atlantic Ocean, in 1901, he used Morse code.

“Marconi was a ham,” Wawrzeniak said.

Today, hams can transmit all over the world and can even communicate with the space shuttle and the International Space Station. While it’s considered a hobby, ham radio can play an essential role in emergencies, when disasters such as hurricanes wipe out landline or cellular telephone communication. They also provide emergency communications services at the local level.

During the first few days after Hurricane Katrina struck the Gulf Coast in 2005, for example, the burden of communication was on hams, brought in from around the country.

Amateur radio operators can communicate with the assistance of satellites, but their communications were going on long before the first satellite was launched into space in 1957.

The pre-satellite method, still in use today and used more often than satellites, is to bounce shortwave signals off the ionosphere, skipping like stones off the surface of a lake. In fact, the phenomenon of long-distance communication using the ionosphere is called “skip.”

About a week ago, during a contest, Ciezniak was able to contact hams in Tahiti and New Zealand, 5,000 to 8,000 miles from Wallingford.

“We call it developing iron pants, to sit here as long as you can stand it,” said Ciezniak of the marathon hamming competitions, which take up most of a weekend.

The ionosphere is activated by sunspots, storms on the sun which pour ionizing radiation into the upper atmosphere. The more activity on the sun, the better the high-frequency communications. Wawrzeniak compared the ionosphere to a collection of ping-pong balls. The more radiation, the more balls and the closer together they are. The less radiation, and the pin-pong balls have greater distance between them, allowing radio signals to pass through and into space.

There’s an 11-year cycle to sunspot activity, and the next cycle was supposed to have started about two years ago. However, for reasons nobody can seem to explain, solar activity is just beginning to increase.

Ham operators do more than just chat with one another across the globe. They build their own radios and fly model airplanes using amateur radio as a link. “Some people are into flying balloons,” said Wawrzeniak, a Wallingford resident.

Every year, on the last weekend of June, a Field Day is held across the nation, held by the American Radio Relay League. The Newington-based organization, founded in 1914, is the largest organization of amateur radio enthusiasts in the U.S. The event is a way of generating enthusiasm for the hobby.

The “relay,” in the national organization’s name, is a throwback to the organization’s inception, when radio messages, with ranges of about 25 miles or so, had to be relayed over longer distances.

Like many amateur radio enthusiasts, Ciezniak caught the bug at an early age, thanks to an uncle. “I fell in love with it,” he said.

That was in the late 1940s, when Ciezniak was about 7 years old. The 70-year-old Ciezniak grew up in Ansonia, and graduated from the Connecticut School of Electronics, in New Haven. He earned his amateur radio license in 1956.

He worked for an electronics company, in New Haven, for about 13 years, but was then hired by the G&O Manufacturing company, which made radiators for cars and trucks. He worked as a branch manager, and then heavy duty product manager, retiring in 2009. Ciezniak said his early devotion to ham radio helped him overcome shyness and develop the communications skills that proved valuable in his professional life, which required speaking in front of large gatherings.

“Amateur radio allowed me to talk to people without being in front of them,” he said. “I conquered my fear of talking to people. It gave me the confidence.”

Toward the end of his professional career, Ciezniak turned back to ham radio. He’d been away from it for more than 10 years, so he had to earn his license again. Now his amateur radio pursuits are aided by computers and software, but it amounts to the same delight: of communicating with people all around the globe.