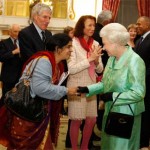 The Royal Commonwealth Society recently invited Mrs Bharathi VU2RBI, Chief Coordinator of the National Institute
of Amateur Radio (NIAR) to present a testimony on the eve of Commonwealth Observance Day.

At the event, which took place on the 8th March 2010 in Westminster Abbey, London in the presence of Her Majesty Queen of England, the Duke of Edinburgh, Prince Charles, High Commissioners of Commonwealth Countries and a group of school children etc, Mrs.Bharathi narrated her experiences in the field of Amateur Radio Communication and contribution to the society for promoting Science & Technology.

It was indeed a rare honor and privilege for an Indian women amateur radio operator to receive this invitation from among the 54 Commonwealth countries.

After the ceremony, a tea party at Royal Commonwealth Society was organized, and followed by reception at Buckingham Palace, where she met Her Majesty the Queen of England.

Mrs.Bharathi told the Queen about her involvement in the promotion of Amateur Radio Communication in India and the activities of National Institute of Amateur Radio, Hyderabad in disaster management over the last three decades.

The Royal Commonwealth Foundation, London has shown great interest in promoting Amateur Radio Communication as a part of disaster management in the Commonwealth Nations.