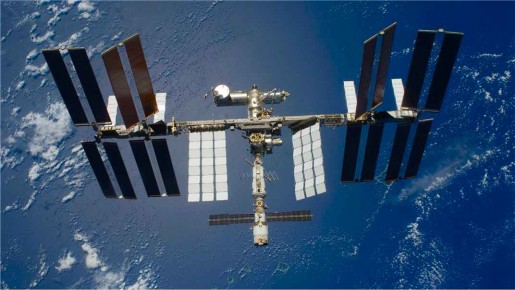 Since the final module was attached to the International Space Station in 2000, amateur radio enthusiasts have been able to listen in on the daily lives of its crew via ham radio signals. But now the station is set to begin broadcasting in the 21st century with Ham TV, making its first transmission last month. Blink and you’ll miss the show, however, as the receiving window is only 20 minutes long before the ISS disappears over the horizon.

From their orbital observation station, astronauts on the ISS regularly take breaks after their day duties to talk to the “earthlings” some 260 miles below. Now the station is fully capable of transmitting video to their fans too, after finishing the installation of a part that arrived with last August’s space freighter. The hardware, developed by Kayser Italia, was connected to the existing S-band antenna on the European Space Agency’s Columbus laboratory earlier this year. This allowed Nasa astronaut Mike Hopkins to be the first star of Ham TV in a video chat with three Italian ground stations: Livorno, Casale Monferrato and Matera.

The broadcast is only one-way, just like (boring) terrestrial TV, so the crew can’t see their audience, but they can hear them over the original radio system. It may be difficult to find the correct equipment, ham radio has fallen foul of the relentless march of technology, but the Amateur Radio on the International Space Station (ARISS) organisation is available to help any budding space opera fans. The organisation uses communication with the satellite in educational experiences with schoolchildren, allowing them to learn more about space and broadcasting using simple equipment.

However the reception of Ham TV broadcasts requires a bit more than the average enthusiast keeps in the shed, so the ESA has set up five ground antennas and provided ARISS with equipment to receive and distribute the video. Once received by a station in Northern Italy, the broadcast will be streamed live over the internet on BATC.tv for others to tune into, however you will need radio equipment (and the carrier frequencies) to talk back with your hosts.

It’s apparently always worth hailing the station while it’s overhead, as an astronaut might float past the always-on receiver and answer the call. Contact will most likely be brief, a good connection requires direct line of sight which can be difficult to maintain when the station zips past at 28,800 kph. But don’t worry if it slips out of broadcast range, it’ll be back overhead again in 92 minutes.