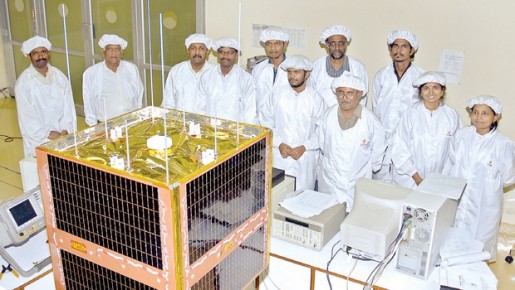 Indian space research got its long overdue credit after a recent successful mission to Mars. The shoestring budget on which India accomplished its Mangalyaan mission left countries the world over in awe. It showed the calibre of Indian scientists in indigenisation of technology and optimum utilisation of resources.

In the realm of space technology, students of Indian Universities are not far behind. Students from various colleges across India have been part of student satellite initiatives, and the Indian Space Research Organisation (ISRO) has so far successfully put four student satellites in orbit, with many more in the pipeline.

Store and forward is a telecommunications technique in which information is sent to an intermediate station where it is kept and sent at a later time to the final destination or to another intermediate station. The main objective of ANUSAT was to enable students to gain experience in the design, building and testing of a microsatellite. ANUSAT was partially successful in achieving the store and forward operations.

In January 2012, ANUSAT exceeded its mission life of two years during which it successfully relayed its health parameters like solar and battery power status, temperature, onboard magnetic field measurements, angle to sun and its spin rate among others. After having completed 1,000 days in orbit, the mission ended in April 2012.

Prof Mala John, HoD, Electronics Engineering, Madras Institute of Technology, who was in charge of the Ground Station, says, “It is very disheartening when loose statements like ‘payload failed’ are made. Store and forward operations involved various levels of transmitting messages called ‘handshakes’. While some were successful, some were not. For us, achieving the communication was the payload. The satellite relayed the telemetry for more time than the mission life. Telemetry is the wireless transmission and reception of measured quantities for the purpose of remotely monitoring environmental conditions or equipment parameters, here, the health parameters of the satellite. The reception and tele-commanding was perfect. The amount of confidence generated in the students because of this project was tremendous.”

Prof PV Ramakrishna, Department of Electronics and Communication Engineering, College of Engineering, who was in charge of the on-board electronics says, “We were in the same boat as ISRO was when it launched its first satellite Aryabhatta. No one had operated a satellite in orbit in India before, other than ISRO at that time. It was a bold step for us. So much of knowledge had to be internalised. Space cells had been operational in various IITs but no one had come forward to build a satellite.”

Students who worked on this project are now doing research in some of the top universities of the world. “The actual people who contribute to space research are experts who have spent 10-15 years specialising in their own fields, be it thermal or mechanical,” he continues, adding that one must keep in mind that student satellites involve budding engineers from various disciplines juggling studies and initiatives like these, unlike the ISRO’s skilled and specialised workforce.

STUDSAT-1, the country’s first pico satellite was launched in 2010. Engineering students from a consortium of seven colleges, four from Bangalore and three from Hyderabad, with Nitte Meenakshi Institute of Technology (NMIT), Bangalore, taking the lead, designed the satellite. Chetan Dixit, team lead of the project manmanagement group of STUDSAT-1, says that a speech by DVA Raghava Murthy, former Project Director of Small Satellites Projects,ISRO, at the 2007 International Astronautical Congress, Hyderabad,about space research and development, floored the students, and this inspired the student satellite.“NMIT took the lead and apart from the objective of encouraging research in miniaturised satellites, we intended to capture images of the earth with a resolution of 90 metres,” says Chetan, who was an undergraduate Electronics and Communications Engineering student at NMIT during the project. “For the ground station to be able to receive the images, the satellite should dump the captured images in that part of the earth where we can receive it, which unfortunately did not happen,” he adds.

STUDSAT-1 weighed just around 850g. The team entered the LimcaBook of Records in 2011 for having built the smallest satellite ever made by students.

Saroj Kumar, research student and core leader, STUDSAT 2, says, “Apart from demonstrating in-orbit satellite separation mechanism between our nano-satellites, we want to demonstrate de-orbiting mechanism for reducing satellite debris. The images captured by the multispectral camera (a multispectral image is one that captures image data at specific frequencies across the electromagnetic spectrum. Spectral imaging can allow extraction of additional information the human eye fails to capture) can be used in urban planning and to identify lands that are more fertile than others. When a specific spectrum over an area is studied, information about the various soil types and vegetation is known. We can know how the crop is faring, and thus determine which lands are more fertile than others.”

He adds that they plan to share the data with various agriculture universities. Another speciality of the satellite, he says, is the indigenously developed ‘nano reaction wheel actuator’ system. When the satellite is in orbit, it experiences, atmospheric drag, magnetic disturbance, gravity gradient and solar radiation; this disturbs the satellite’s orientation. The nano reaction wheel actuator and a magnetic torquer coil helps stabilise this. “If procured from western countries, it would have cost around `9 lakh. We designed it ourselves and would like to test it,” he continues.

Speaking about the advantage Indian students have over other countries, he says ISRO provides a free launch for student satellites, unlike other space organisations like NASA. “Here, we are allowed to use their labs and they review our project. It costs around `25 lakh to put one kg in space but ISRO encourages students to pursue space research,” he says. 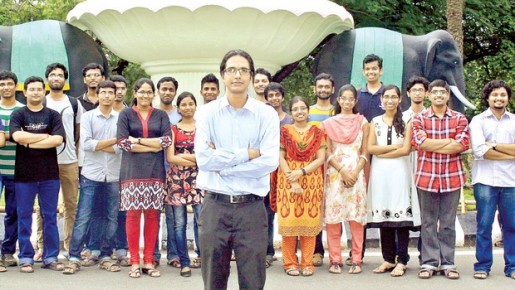 Jugnu, a nano-satellite designed and developed by students of Indian Institute of Technology, Kanpur, was launched in 2011. Its objective was to image the earth in near infrared region and test image processing algorithms, and evaluate its GPS receiver for its use in satellite navigation.It was also intended to test an indigenously developed Inertial Measurement Unit in space which is used to measure the vibration and angular rate of the satellite. The students also developed the ejection subsystem, for Jugnu which is the interface between the satellite and the rocket.

Once the rocket has achieved the required orbit, the rocket will give a trigger signal. This trigger signal will open the latch putting the satellite in place, separating it from the rocket with a small initial velocity imparted by a spring sitting at the base of the ejection system.

“It was made as part of our golden jubilee celebrations. It outlived its life of six months and I still get reports of its beacon being heard. We were 85 per cent successful. It was developed over more than three years and at any given point 40-45 students had worked on it. The privilege of communicating with ISRO scientists was the greatest advantage and learning experience of our life,” says Shantanu Agarwal, student team lead of Jugnu who now heads Powerfly Aerospace, a startup in aerospace sciences incubated at IIT-K.

About the current scenario of investment in space research, he says, “Investors expect returns in two to three years. But it takes six to seven years for satellites to generate a viable research output.”

SRMSAT another nano-satellite developed by the students and faculty of SRM University, Chennai, was put in orbit in 2011 by PSLV C-18 along with Jugnu.

Loganathan M, Project Architect, SRMSAT, says, “The objective was to monitor the carbon dioxide and water vapour levels in the atmosphere using an infrared spectrometer by studying their absorption spectra. This would help us understand how much CO2 individual cities are giving out. Our payload did not work, but as a satellite it has functioned well.” The satellite is doing well thermally and still relays primary information, says Loganathan, who was previously the deputy project director of the Satellite Recovery Experiment Project at ISRO.

Pratham, a satellite initiative of IIT Bombay, was started in 2007 and has been pending since. It overshot its schedule in 2012 and missed its launch slot. With a new team, it is set to meet its deadline of March 2015this time around and hand over its satellite to ISRO on time.

Shantanu Shahane, the present project manager of Pratham says, “Our objective is to study the total electron count (TEC) in the ionosphere. We believe there is a correlation between the TEC before and after a Tsunami, and estimation of this can help us predict a tsunami. This is one of the theories we will test.” He adds that it can help in studying astral and extraterrestrial phenomena, and the data obtained could be useful in astronomy.

IIT- Madras is currently working on their Low Earth Orbit nano-satellite IITMSAT, and intends to complete the project by 2016. The satellite’s mission is to collect and transmit data about electrons and protons in the Earth’s upper-ionosphere in its mission life of one year. It intends to expand on existing data for research on an earthquake prediction model based on ionospheric changes before seismic activity. It is currently designing and building a Space-based Proton and Electron Energy Detector (SPEED) that measures the energy spectrum of protons and electrons. IITMSAT’s payload will consist of SPEED.

“Over 1,000 km above the earth lies the Van Allen radiation belts. It has been a point of scientific interest for long. We intend to study these belts. Earlier media reports suggested that we will be able to predict earthquakes.However, that seems far-fetched. We will be navigating below the belt unlike NASA which intends to pass right through the belt,” says Prof David Koilpillai, Dean of Planning, IIT-M and project mentor, IITMSAT. The student heads include Akshay Gulati and Suresh Susurla.

The Van Allen belt, a layer of highly charged particles held in place by the Earth’s magnetic field was a cause for concern during the launch of Mangalyaan too. Increased exposure to these belts is hazardous to space missions because of its high thermal radiations.

Recent reports in The New Indian Express suggested that since the testing requires the presence of high energy particles, this would be done at the Atomic Power Station at Kalpakkam on the outskirts of Chennai or at the Tata Institute of Fundamental Research, Mumbai.

M Annadurai, Programme Director, Indian Remote Sensing and Small, Science and Student Satellites, ISRO, says, “I have overseen two student satellites from a launch point of view during my tenure so far — SRMSAT and Jugnu. As satellite designing is interdisciplinary, where students have to look at communication, power, attitude control, thermal environment and multiple other scenarios, it gives an avenue for both electronics and IT students to use their knowledge. We give them technical guidance, provide testing facilities and a free launch but the design and fabrication is done by them in their respective institutes.”

For students to design a satellite, make it pass the endurance tests and operate it in orbit for six months is a big achievement, and in the long run their findings may contribute to ISRO’s spaceflights, he adds optimistically.