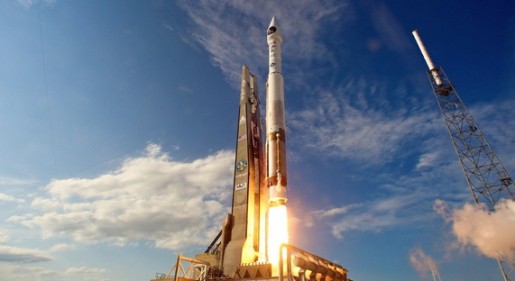 A “Dnepr” launcher set to lift off from Dombarovsky, near Yasny, Russia, on November 21 will carry more than two dozen satellites from 13 countries. Individual satellite teams are now in Yasny preparing their payloads for launch. Several of the satellites will carry Amateur Radio payloads, marking this as the largest single deployment of ham radio satellites. Paving the way for this month’s event was the August 22 Dnepr launch of the KOMPSAT-5 satellite from Korea — the first Dnepr launch in 2 years. This month’s launch had been postponed for more than a year to work the wrinkles out of the Dnepr program. The DubaiSat-2 earth-imaging satellite will be the principal payload of this cluster mission.

Some of the satellites headed into orbit will be contained within the Italian UniSat-5 microsat package. UniSat-5 will include a pair of UHF transceivers operating 9k6 GMSK AX25 protocol. From “PocketQube” launchers, UniSat-5 will deploy several smaller satellites, and one of the smaller satellites will release yet another satellite, reminiscent of decorative Ukrainian eggs within eggs. UniSat-5 will deploy Eagle-1 (BeakerSat-1, see below), Eagle-2 ($50Sat, see below), Qube-Scout S1, estar-2 (CW and 1k2 AFSK UHF downlink), Wren, and PUCP-SAT-1, which in turn will disgorge Pocket-PUCP, a tiny spacecraft built by students in Peru that will carry four temperature sensors and transmit the data using a 10 mW CW UHF transmitter using 30 kHz FSK.

Scheduled to be among the other Amateur Radio-payload carrying satellites is FUNcube-1, a 1U CubeSat that is a collaboration between AMSAT-UK and AMSAT-NL. It will carry an “educational beacon” (1200 baud BPK — daytime operation) and a 20 kHz wide U/V inverting SSB/CW transponder running 300 mW PEP (nighttime operation). A project begun in 2009, FUNcube-1 will provide a signal directly to schools, with the “target audience” students at the primary and secondary levels.

FUNcube-1 is the middle 1U CubeSat of three sharing a 3U launch vehicle pod. The other two are ZACube-1 — the first South African satellite — and HiNCube from Norway, which will identify and transmit housekeeping data in the 70 centimeter band in CCSDS protocol. ZACube-1, in addition to carrying VHF and UHF communication equipment, has a 20 meter beacon that will transmit on 14.099 MHz.

Another Amateur Radio satellite, Delfi-n3Xt, is a 3U CubeSat developed by the Technical University of Delft in the Netherlands. It will feature a 40 kHz wide U/V transponder that will be activated after other experiments are completed, as well as a high-speed S-band downlink.

Beakersat-1, also called Eagle-1, is a FemtoSat (mass between 10 and 100 g) built to the 2.5 U PocketQube form factor by undergraduate students at Morehead State University in Kentucky. Downlink telemetry will be transmitted to the ground station via Morse code.

$50Sat, also called Eagle-2, will transmit data telemetry about the satellite’s operation, a sequence of call signs in slow FM Morse and some key data as fast FM Morse (120 WPM). The main data payload will be transmitted as FSK RTTY, which should be readily heard on the ground with basic Amateur Radio equipment. $50SAT is a collaborative educational project between Professor Bob Twiggs, Morehead State University, and Howie DeFelice, AB2S; Michael Kirkhart, KD8QBA, and Stuart Robinson, GW7HPW.

These small satellites also are on the November 21 Dnepr launch roster:

Also onboard are UWE-3, built by students at Germany’s Julius Maximilans-University of Wurtzburg; BRITE-PL1, the first Polish satellite, and Humsat-D.