Morse code is on a comeback 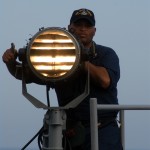 A law change has opened up a radio frequency band so that hobby operators around the country can again communicate in dashes and dots.

There were a few last minute nerves in preparation for a sound that hasn’t been heard in New Zealand for 15 years.

Ramon Chandler began his Morse code career sending messages for the Wanganui Telegraph in the 1940s.

“It’s my second language I guess you could say,” he says.

A language he can now revive since a radio frequency for Morse code was re-opened this month.

The news has excited Musick Point radio club members, who on their maiden transmission got a reply from two other hobbyists in Waimauku and Whangarei.

“I think it’s bringing history back…which is what we should do,” says amateur radio operator Ian Walker.

While more enthusiasts are going retro and getting Morse equipment set up in their homes, modern satellite radio has a much longer reach.

When the tsunami struck Samoa, club members just happened to be listening and were able to gather information for Civil Defence.

But the communication system is mostly used for friendly chatter.

Once two operators have spoken to each other from across the world a card is then sent to confirm that communication has taken place – like a postcard from around the world.

Mr Walker says there are however conversation rules.

You could say it is the Morse code of conduct.

AA9PW HamMorse: Morse code practice on the iPhone
Features of Ham Morse v1.450 (October 16th, 2014) Ham Morse allows you to practice morse code on your iPhone, iPad or iPod Touch. It is designed particularly for Ham radio operators and others who wish...