Something is up with the sun.

Scientists say that solar activity is stranger than in a century or more, with the sun producing barely half the number of sunspots as expected and its magnetic poles oddly out of sync.

The sun generates immense magnetic fields as it spins. Sunspots—often broader in diameter than Earth—mark areas of intense magnetic force that brew disruptive solar storms. These storms may abruptly lash their charged particles across millions of miles of space toward Earth, where they can short-circuit satellites, smother cellular signals or damage electrical systems.

Based on historical records, astronomers say the sun this fall ought to be nearing the explosive climax of its approximate 11-year cycle of activity—the so-called solar maximum. But this peak is “a total punk,” said Jonathan Cirtain, who works at the National Aeronautics and Space Administration as project scientist for the Japanese satellite Hinode, which maps solar magnetic fields.

“I would say it is the weakest in 200 years,” said David Hathaway, head of the solar physics group at NASA’s Marshall Space Flight Center in Huntsville, Ala.

Researchers are puzzled. They can’t tell if the lull is temporary or the onset of a decades-long decline, which might ease global warming a bit by altering the sun’s brightness or the wavelengths of its light.

“There is no scientist alive who has seen a solar cycle as weak as this one,” said Andrés Munoz-Jaramillo, who studies the solar-magnetic cycle at the Harvard-Smithsonian Center for Astrophysics in Cambridge, Mass. 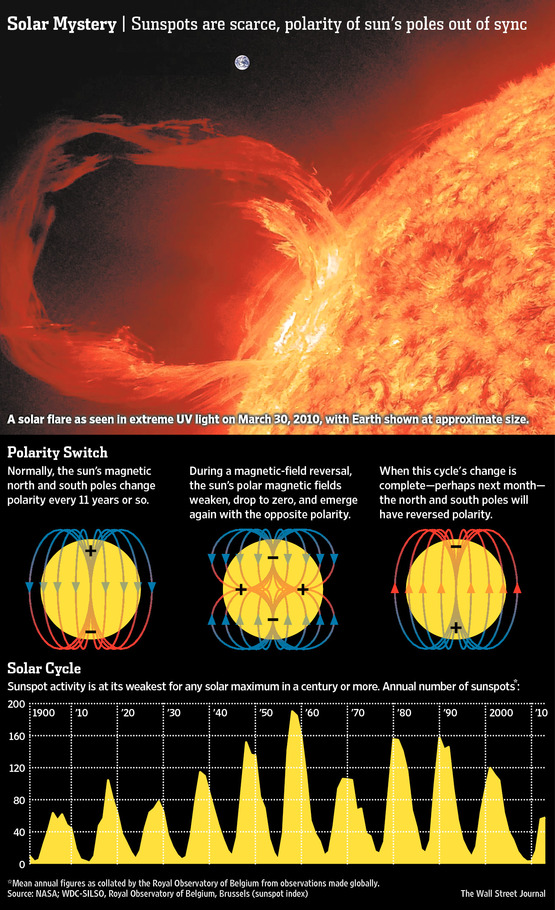 To complicate the riddle, the sun also is undergoing one of its oddest magnetic reversals on record.

Normally, the sun’s magnetic north and south poles change polarity every 11 years or so. During a magnetic-field reversal, the sun’s polar magnetic fields weaken, drop to zero, and then emerge again with the opposite polarity. As far as scientists know, the magnetic shift is notable only because it signals the peak of the solar maximum, said Douglas Biesecker at NASA’s Space Environment Center.

But in this cycle, the sun’s magnetic poles are out of sync, solar scientists said. The sun’s north magnetic pole reversed polarity more than a year ago, so it has the same polarity as the south pole.

Scientists said they are puzzled, but not concerned, by the unusual delay. They expect the sun’s south pole to change polarity next month, based on current satellite measurements of its shifting magnetic fields.

At the same time, scientists can’t explain the scarcity of sunspots. While still turbulent, the sun seems feeble compared with its peak power in previous decades. “It is not just that there are fewer sunspots, but they are less active sunspots,” Dr. Schrijver said.

However, the sun isn’t idle: After months of quiescence, it unleashed vast streams of charged particles into space five times in as many days last month, and flared again last week. Even so, these outbursts exhibited a fraction of the force of previous solar maximums.

By comparison, a Halloween solar storm in 2003, near the peak of the last solar maximum, was the largest of the Space Age. Even though it mostly bypassed Earth, the storm disabled a Japanese satellite, sent astronauts aboard the International Space Station scrambling for radiation shelter, disrupted drilling for oil and gas in Alaska, scrambled GPS navigation and forced the U.S. Defense Department to cancel military maneuvers.

As the solar cycle winds down in the years ahead as part of its normal cycle, blasts of charged particles should become even less frequent. Among other things, Earth’s outer atmosphere will cool and contract, which can extend the life of satellites by lessening the drag on them.

“That makes the commercial satellite operators all happy,” said Todd Hoeksema at Stanford University’s Wilcox Solar Observatory. “And the astronauts are happy when there is no radiation.“

Several solar scientists speculated that the sun may be returning to a more relaxed state after an era of unusually high activity that started in the 1940s.

“More than half of solar physicists would say we are returning to a norm,” said physicist Mark Miesch at the High Altitude Observatory in Boulder, Colo., who studies the internal dynamics of stars. “We might be in for a longer state of suppressed activity.“

If so, the decline in magnetic activity could ease global warming, the scientists said. But such a subtle change in the sun—lowering its luminosity by about 0.1%—wouldn’t be enough to outweigh the build-up of greenhouse gases and soot that most researchers consider the main cause of rising world temperatures over the past century or so.

“It may give us a brief respite from global warming,” said Dr. Hathaway. “But it is not going to stop it.“