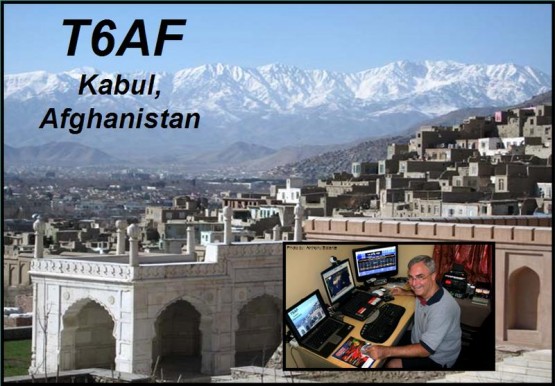 James McLaughlin, WA2EWE/T6AF, was one of several killed in Kabul, Afghanistan on Wednesday, April 27. News sources say that eight American troops and a US contractor died Wednesday after an Afghan military pilot opened fire during a meeting in an operations room of the Afghan Air Corps at the Kabul airport — the deadliest episode to date of an Afghan turning against his coalition partners, officials with the NATO-led International Security Assistance Force (ISF) in Afghanistan said.

Licensed since 1972, McLaughlin was a career US military officer. Bob Magnani, K6QXY, tiold the ARRL that McLaughlin was just in the US a week ago, visiting his family. His son Adam, KD6POE, works for me. He told me that his dad had been in Afghanistan and Iraq many times over the past few years, most currently serving as a flight instructor.” McLaughlin posted on his qrz.com page that “almost every day, I operate at around 1230 – 1430 UTC. Sometimes I am QRV until around 1500 UTC.” As of March 26, 2011, he had logged 4359 QSOs, most of them on RTTY and PSK.

—Thanks to Russ Bentson, K6KLY, CNN and Fox News for the information

Sporty’s SP-400 Handheld NAV/COM
Aviation Consumer's "Gear of the Year!" "...better than some panel-mounted gear." "Sporty's SP-400 Shines. Its performance is clearly exceptional." "You can easily pick this unit up and use all of its features...