The New ARRL Web Site Delayed to “Get it Right”

The New ARRL Web Site Delayed to “Get it Right” – !! A new President for the ARRL, Kay Craigie N3KN. 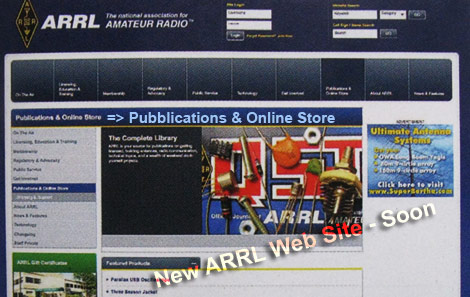 After meeting with ARRL staff on February 23, two days before the new ARRL Web site was to launch, ARRL Chief  Operating Officer Harold Kramer, WJ1B, made the decision to delay the unveiling of the Web site until late March. – The current delay is necessary to assure that we have all of the data connections correct.

The new Web site — which will contain the online store, class registrations, audio, video, DXCC information, contest data, individualized member options and other 21st century opportunities for members — is one of the  largest technology upgrade activities that ARRL and Fathom, the company programming the site, have ever undertaken. –
Link: ARRLweb Home page

A New President for the ARRL at the January 2010 Board of Directors.

The ARRL Board electet Kay Craigie, N3KN as the new ARRL President to succeed Joe Harrison, W5ZN, and the first female Presidente in the history of the League.

Congratulations to Dr Kay Craigie N3KN who has just been elected as President of the ARRL – by www.radiocronache.com