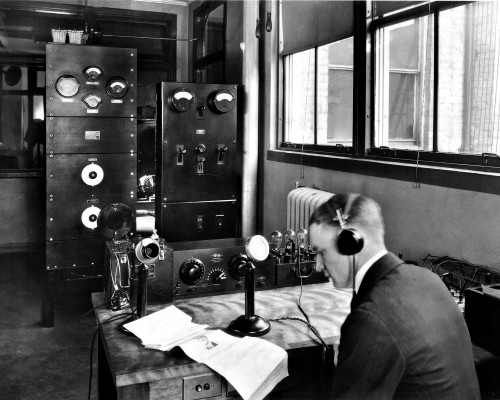 The station is WWJ in Detroit, a contemporary to KDKA as one of the country’s first radio stations. We are in the transmitter room in the Detroit News Building in early 1922. The broadcast studio is located in a separate room.Photo from the Detroit News Archives

The rig seen beyond the operator’s desk is actually the station’s second transmitter; it replaced a primitive DeForest 50 Watt transmitter that the Detroit News used beginning in August of 1920 under the call letters 8MK. (The station was re-licensed as WBL in 1921 and became WWJ in March of 1922.)

The transmitter seen here, installed in February 1922, was the world’s first factory-built model, the Western Electric 1-A.

This mighty 500-Watt unit consisted of two panels: the RF section and modulator on the left, and the power control panel on the right, which controlled the two motor generators that provided the DC energy, located in another room because of their constant noise.

The two big knobs on the front of the transmitter are marked “Oscillator Tuning” and “Frequency.” Crystal controlled oscillators were still in the future; these early transmitters were just free-running high-power oscillators. The antenna capacity was a part of the oscillator circuit, and so the station’s frequency tended to drift as the wind blew the hammock-style wire antennas around. Static buildup on the antennas during wind storms also caused frequent transmitter failures. The result later that year was the introduction of the 1-B transmitter, which added a third big “Antenna” knob to control an output coupling transformer.

On the operator’s desk, we see a wavemeter with its loop antenna, used by the operator to zero-beat the transmitter to the station’s assigned frequency (360 meters, or 833 kHz). To its right is a Grebe CR5 receiver and audio amplifier, used for program monitoring and for the required listening for maritime distress signals during five minutes each hour. Receiver batteries and antenna knife switches are to the operator’s right. Just out of view outside the window is a large loop antenna that fed the receiver. In addition to operating the transmitter and making station announcements, the operator’s main job was to ride gain on the studio microphone to keep the transmitter from overmodulating.

Later photos from WWJ show this room gradually filling up with more equipment, more operators and a more powerful transmitter. It continued to be used by the station for the next decade.

John Schneider is a lifelong radio history researcher. Write the author at jschneid93@gmail.com. This is one in a series of photo features from his collection. Find more under the Columns/Roots of Radio tabs at radioworld.com.