Penguins and elephant seals have taken centre-stage in time-lapse images from a remote monitoring camera installed on sub Antarctic Heard Island. The solar-powered digital camera was set up at Atlas Cove station in December last year to take 10 photos a day. More than 1100 images were recovered from the camera’s memory card in April. The camera is positioned to face south-east looking towards the isthmus and Big Ben, which towers over the island at 2745 metres. The images show king penguins gathering on the isthmus and investigating the remnants of the Atlas Cove station, while elephant seals wallow near the old buildings.

In many of the photos rain and cloud obscure the view, but there are also a number of blue-sky days and a dusting of snow in the later pictures as winter approaches. The camera is part of the Australian Antarctic Division’s remote-monitoring project to monitor the state of the Heard Island reserve, in the Southern Ocean, about 4000 kilometers south-west of mainland Australia.

The camera will continue recording at Atlas Cove during winter. View a time-lapse video of the 4 month summer period below. 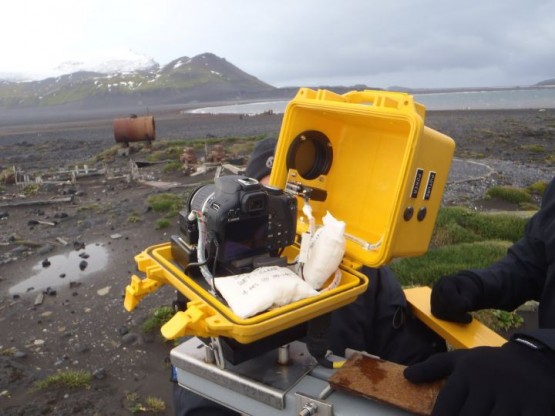