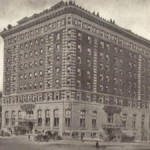 “To commemorate the 90th Anniversary of the 1921 WBZ/Westinghouse Springfield MA towers before their demolition.

“AS THIS IS A DEMOLITION/CONSTRUCTION SITE NO ONE WILL BE ALLOWED ON THE PREMISES.”

WBZ was founded at the Westinghouse plant in East Springfield, Mass, in 1921. WBZ’s commercial license, the first granted specifically for broadcasting, was issued 15 September, 1921, on 900 kHz. In 1924, Westinghouse pioneered synchronous broadcasting with the debut of station WBZA in Boston, simulcasting WBZ’s programming on the same frequency, at the time 990 kHz. In 1931, WBZ built a new 50-kW transmitting plant in Millis, Mass., outside Boston, and WBZ Boston became the primary station, with Springfield taking on the WBZA calls. In July of 1940, WBZ moved its transmitter to Hull, where it remains to this day. The North American Radio Broadcasting Agreement, which came into effect in March 1941, moved the station to 1030 kHz. In the mid-1940s, WBZ was an early Boston pioneer in FM radio service; see WMJX for the complete history. WBZ also operated a shortwave station at this time, called WBOS; the abandoned antenna supports were visible at the Hull site until their demolition in 1995.

In 1948, WBZ added television service and moved to its current home at 1170 Soldiers Field Road, the former transmitter site of WCOP 1150. In 1962, the FCC ordered Westinghouse to shut down WBZA before Westinghouse’s purchase of a station in Los Angeles could be approved; the WBZA towers still stand atop the former Westinghouse plant on Page Boulevard, and can be seen from I-291.

After decades as an NBC Radio (and before that, NBC Red Network) affiliate, WBZ joined the rest of Westinghouse’s stations in dropping its network ties in the late 1950s. Instead, WBZ became a music- oriented top-40 station, with disc jockeys such as Dick Summer and Jefferson Kaye. Carl deSuze kicked off WBZ’s day all through the sixties and seventies, with Dave Maynard following him. Overnights were the province of Larry Glick and “Glick University”.

During the 1960s and ’70s, WBZ, along with other class I-A “clear channel” stations, petitioned the FCC to eliminate the 50-kW limit on AM station power which had stood since the 1940s. WBZ proposed an upgrade to 500 kW from a new transmitter site in Provincetown, which would have blanketed all of New England daytime and restored regular nighttime coast-to-coast service which WBZ had last seen in the ’30s. Heeding the desires of smaller broadcasters, the FCC decided instead not only to deny the power increases the clears had requested, but to effectively eliminate the clear channel service, limiting stations’ protected secondary service area to a 750-mile radius.

News and public affairs remained a priority at WBZ throughout the music years, and by the early 90s, music was taking a back seat to talk. With the start of the Gulf War in 1991, the last of the music ceased on WBZ. By 1992, the station eliminated daytime talk to become all-news from 5 AM until 7 PM. Veterans Gary LaPierre on news and Gil Santos on sports headed up the morning crew, with Anthony Silva and Diane Stern as afternoon anchors. The demise of all-news competition at WEEI, along with cutbacks in news at WHDH and WRKO, brought additional talent to the WBZ newsroom. Evening talk host David Brudnoy made national headlines in the mid-90s as his battle with AIDS became public. After several months off the air recuperating, Brudnoy returned to the air from a studio at his home in early 1995. (He later wrote a book, Life Is Not a Rehearsal, about his struggle).

In 1995, WBZ added CBS radio to its long-standing ABC Information affiliation, making it one of the only stations at the time to be affiliated with both ABC and CBS. The CBS affiliation had previously been on WEEI 850 and before that WEEI 590. Later that year, Westinghouse purchased CBS outright, and abandoned the old “Group W” moniker to operate all of its stations under the CBS banner. (WBZ remains an ABC Information affiliate in addition to CBS, and for some years continued to broadcast the ABC-I network newscast rather than CBS’s.)

In December of 1997, Westinghouse Electric changed its corporate name to CBS Corporation, better reflecting its concentration on broadcast media as opposed to industrial businesses. Also late in 1997, CBS agreed to purchase rival American Radio Systems. In June of 1998, this merger was finally consummated, but in the face of Justice Department opposition, WRKO, WEEI, WEGQ, and WAAF were re-sold that August to Entercom Communications. WNFT had been placed in trust to meet FCC ownership limits, and was later sold separately to Spanish-language operator Mega Broadcasting.

Amidst the corporate ownership changes, little changed on the air at WBZ. The death of overnight talk host Norm Nathan in 1996, followed by the retirement of his weekday counterpart Bob Raleigh in 1999, put Steve LeVeille and Jordan Rich in new roles. Brudnoy’s move to a three-hour shift gave Paul Sullivan a new late-night talk slot. Late in 1996, the station moved its newsroom from the west side of the Soldiers Field Road building to a newly-renovated joint TV-radio newsroom in a new addition on the building’s southeast side, leading to greater synergy between the radio and TV news operations.

WBZ’s weekends went through a series of transitions in the nineties, with a heavy focus on sports from 1993 (around the time of a failed attempt to buy all-sports WEEI) until 1999, when the station hired additional news staff and expanded its all-news format to weekend middays and afternoons.

Late in 2003, David Brudnoy was diagnosed with a rare form of cancer, Merkle-cell carcinoma. After spending a few months off the air recuperating from the side-effects of chemotherapy, Brudnoy returned to the air, only to learn in November, 2004, that the cancer had metastasized to his liver and kidneys. After an emotional broadcast farewell, Brudnoy died on December 8, 2004. Meanwhile, Brudnoy’s heir apparent, Paul Sullivan, had been diagnosed with a brain tumor that November. Sullivan was officially named Brudnoy’s successor, while at the same time reducing his shift from five hours to four to accomodate an additional hour of news.

On December 29, 2006, LaPierre retired from WBZ after 42 years on the air and 40 years as morning news anchor. LaPierre’s final morning on the air was marked with on-air tributes from current and former Boston radio personalities, salutes from prominent politicians, a video webcast and (in February 2007) the dedication of the “WBZ Radio Hall of Fame” on the front wall of the Soldiers Field Road building, with LaPierre as the first inductee. Former WOR (710 New York) morning host Ed Walsh succeeded LaPierre as anchor of the “WBZ Morning News”.

On July 14, 2009, CBS announced format changes in Boston and Washington that would bring sports-talk formats to the FM dial in both markets. In Boston, WBMX 98.5 would move to WBCN 104.1 on August 13, displacing WBCN’s format and branding to an automated HD2 stream, with the new “Sports Hub” WBZ-FM launching the same day on 98.5. Boston Bruins hockey play-by-play moved over from WBZ, joining New England Patriots football from WBCN to anchor the new format. “Mix” took on the WBZ-FM calls in advance of the move, on August 5. On August 11, a few hours before the switch, WBZ’s simulcast moved from WODS’s HD3 to WBZ-FM’s HD3.