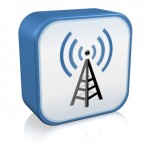 IEEE has just released a new, official standard for 802.22 Wi-Fi, and it can cover 12,000 square miles with just one single base station—about the same as broadcast radio and television. This, of course, will use up spectrum including 54MHz to 698MHz—the analog TV spectrum that allowed signals to travel out that far. The new Wi-Fi standard will be able to broadcast data at up to 22 Mbps, 62 miles out from just one single base station, making it easy to provide rural broadband or to blanket cities with municipal Wi-Fi.

IEEE 802.22 is a standard for Wireless Regional Area Network (WRAN) using white spaces in the TV frequency spectrum. The white spaces exist between used channels. The switchover to digital television frees up large areas between about 50 MHz and 700 MHz. The development of the IEEE 802.22 WRAN standard is aimed at using cognitive radio (CR) techniques to allow sharing of geographically unused spectrum allocated to the Television Broadcast Service, on a non-interfering basis, to bring broadband access to hard-to-reach, low population density areas. But theoretically, this can be used in larger cities as well, if the demand on bandwidth isn’t too high (i.e. a subscription basis to lower the number of users).

How will your PC or laptop transmit data back to the base station? Most likely a small transmitter/receiver base station with an antenna (a beefed up wireless router). The signal strength doesn’t have to be nearly as strong as cellular.

Now that the official standard has been approved, companies can start building things that incorporate 802.22 technology.

From the press release:
This new standard for Wireless Regional Area Networks (WRANs) takes advantage of the favorable transmission characteristics of the VHF and UHF TV bands to provide broadband wireless access over a large area up to 100 km from the transmitter. Each WRAN will deliver up to 22 Mbps per channel without interfering with reception of existing TV broadcast stations, using the so-called white spaces between the occupied TV channels. This technology is especially useful for serving less densely populated areas, such as rural areas, and developing countries where most vacant TV channels can be found. IEEE 802.22 incorporates advanced cognitive radio capabilities including dynamic spectrum access, incumbent database access, accurate geolocation techniques, spectrum sensing, regulatory domain dependent policies, spectrum etiquette, and coexistence for optimal use of the available spectrum.

RBR-TVBR observation: We hope this would be more successful than the WiMax rollout that hasn’t taken off like predicted here in the states. It could be due to the spectrum WiMax uses—typically in the 2.3 GHz 3.65 GHz range—not terribly robust in penetrating buildings and stuctures, but it can carry fast speeds. It seems to be deployed mostly on college campuses and supplied to businesses in a handful of markets.

New HAM WEB Project released for RU HAM’s
The HAMSTORY.ru WEB Project has been developed & provided by Sparky KL1A / RW3AH in April 2012 and successfully integrated to Internet. This is a Amateur Radio Project for Russian speaking HAM's. The WEB Engine...