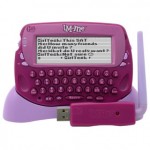 A $30 toy, Mattel’s pink GirlTech IMME, an instant-messaging device with a miniature keyboard, can be used to disrupt radio communications used by every major federal law enforcement agency, reports C/Net
An associate professor at the University of Pennsylvania, Matt Blaze co-authored a paper (pdf) at the Usenix Security symposium in San Francisco this week.

Project 25 radios, widely adopted across the federal government and many state and local police agencies, boost interoperability, so different agencies would be able to talk to one another, while providing secure encrypted communications. But federal agents frequently don’t turn encryption on, the researchers found.

To intercept the Project 25 radio communications, the researchers used a high-quality receiver that cost about $1,000 and can be purchased off-the-shelf. But, Blaze said, it’s possible to do it on the cheap: “You can do everything you need with equipment you can buy at Radio Shack… hobbyist-grade equipment.”

Representatives of the Association of Public-Safety Communications Officials (APCO), which has championed the Project 25 standard, and the Telecommunications Industry Association, which maintains the standard, did not respond to C/Net’s request for comment.

The reason jamming is relatively easy is that the Project 25 doesn’t use spread spectrum, which puts the would-be jammer at a disadvantage. By contrast, P25 relies on metadata that must be transmitted perfectly for the receiver to make sense of the rest of the communication. A pulse lasting just 1/100th of a second, it turns out, is enough to disrupt the transmission of the metadata.