To commemorate the 50th anniversary, Icom Co., Ltd. (President Tsutomu Fukui) will release the special edition of ID-51 DSTAR Radio.
ID-51 is a most popular model of the D-STAR VHF/UHF Transceiver.

As the 50th anniversary model Icom, it is a lineup with five colors red, turquoise, lime, white, and black this time. Long antennas In addition to the standard antenna, play an effective role in the reception of air band radio and especially also included. In addition, Fast data communication of DV mode to achieve automatic lists and simple setting function of the analog repeater, the data communication rate of about three times that of conventional, corresponding Android. Apps RS-MS1A to is not only D-STAR ※ It becomes equal to, a special commemorative model specification only. In addition, we have also adopted the 50th anniversary of the original opening screen. 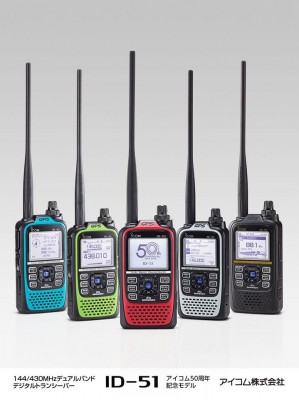 In addition to the Key Features:
● Standard antenna, and comes with a long antenna.
● Automatic list up and simple set of analog repeater.
● Support for Android. Apps RS-MS1A in (freeware)
● To provide a data communication rate of about three times that of the conventional.
● Five body radio colors.
● 50 anniversary of the original opening screen Icom.
● limited sale (1,000 units each color) 5,000 worldwide.

Estimate Price is around $480 USD

ICOM IC-705 HF/VHF/UHF SDR Transceiver
A new hybrid radio. Base station radio performance and functions are packaged in a compact and lightweight portable size. Whether you are taking your hobby to a SOTA, POTA, or some other "On the Air"...