The DVAP, produced by INet Labs who brought you the DV Dongle, is similar to many of the homebrew D-STAR Hotspots.

The device is used for simplex operations, but it does connect to the gateway. The DVAP plugs into your Windows or MAC OS X computers via the computer’s USB port and uses the internet connection to communicate with the D-STAR gateway. The DVAP has a very low-power signal at only about 10 mW. It’s similar to the functionality of a simplex Echolink link node. The device’s 10 mW signal on the UHF 70cM band is intended to reach only a few hundred feet, but it allows you to use your D-STAR HT away from the computer around your house or around your neighborhood at low power. 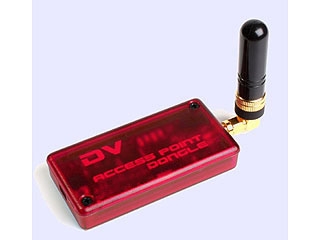 We have completed the design, prototype, and FCC/CE testing for the new 70cm version of the DVAP. It has the same red case and power levels as the 2M unit.

The units should be available through dealers the first week of October.