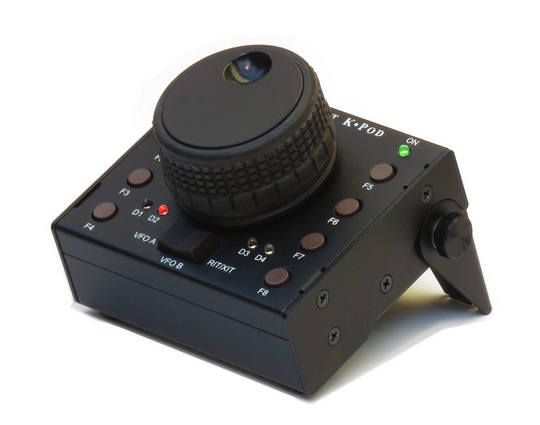 Our new K-Pod is the ideal companion to your Elecraft K3 or K3S Transceiver, maximizing both convenience and operating efficiency. At only 3.5 x 3 x 1 inches (9 x 7.5 x 2.5 cm), it can be placed anywhere the action is, typically next to a computer keyboard. It’s versatile enough to integrate transceiver and station control functions, putting you in command as never before.

A utility jack beneath the radio’s front panel acts as the K-Pod’s data interface. The unit can be powered from the radio’s rear 12-V accessory output, the pod’s own USB port, or any 8-15 V, 50-mA DC power source.*

Weighted, Soft-Touch Knob Assignable to VFO A, VFO B, or RIT/XIT Offset

The K-Pod has a heavy, free-spinning knob with a great feel that won’t wear you down during extended operation. It’s attached to a 400-count ball-bearing optical encoder, providing fine-grain frequency control. Friction can be adjusted to individual preference.

You can instantly map the knob to VFO A, VFO B, or RIT/XIT offset using the K-Pod’s rocker switch. Three of the unit’s user-definable LEDs indicate rocker switch position, by default. Switch events can also be audibly reported by the K-Pod’s built-in audio transducer.

Each of the K-Pod’s tactile-feedback switches (F1-F8) has programmable tap and hold functions. For example, they can be used to duplicate controls on the radio’s front panel, or as hot keys into often-used menu entries.

But the possibilities go well beyond this. When a K-Pod switch is pressed, it can execute a series of one or more commands stored in the transceiver itself. A command sequence can engage complex VFO splits or special receiver settings, play transmit messages, clear the RIT offset, select a receive antenna, toggle diversity reception, etc. The K-Pod manual includes step-by-step instructions for switch programming, with many examples.

A USB port is provided on the K-Pod for firmware updates and future station control uses. This port can also be used to configure the K-Pod’s switches to perform other special functions, such as activating the unit’s 3 general-purpose outputs. These outputs are open-drain, acting as contact closures to control relays, etc., in other station gear.