FlexRadio Systems is changing the face of Ham Radio. It is not often that a team of smart people are allowed to start with a clean sheet of paper and dream. Imagine if we could take everything we have learned in amateur, commercial and government markets and build a new class of transceiver, virtually without limits. Imagine if digital radio capabilities previously affordable only for commercial and government applications were now cost effective for Ham transceivers. Imagine a radio that will be a platform for dream applications both today and in the future.

With the FLEX-6000 Signature Series radios, FlexRadio brings a wealth of new capabilities to the amateur including direct digital reception, transmission and networking. At the core of all these new capabilities is SmartSDR. SmartSDR organizes all of the signal processing power in the FLEX-6000 Signature Series radios into an advanced reusable framework. First, the RF subsystems in the FLEX-6000 are virtualized as reusable hardware blocks or Signal Capture Units (SCU) with specific capabilities. SmartSDR understands the capabilities of each SCU and how to harness its power.
As data from the SCUs enters the Field Programmable Gate Array (FPGA) at a combined rate of over 7.8Gbps, SmartSDR performs advanced Digital Signal Processing (DSP) on the data, splitting it into individual Panadapters and Slice Receivers. Panadapters are visual displays of the RF spectrum akin to a spectrum analyzer, but with more capabilities for the amateur. Slice Receivers are dynamically allocated full performance receivers that can be directed to the speaker or headphones for listening, or can be streamed as digitized RF to external digital applications. Panadapters and Slice Receivers can be created and destroyed at will.

What distinguishes SmartSDR is the simplification of these advanced concepts into an elegant graphical user interface (GUI) that places you in complete control. Want to create an additional Panadapter to watch for possible 10m band openings? No problem, simply click to add the Panadapter and SmartSDR directs everything from the advanced signal processing software down to the filters in the SCU to form an optimized receiver. Want to decode all of the CW signals on 40m while working DX on 20m? It’s just a few clicks away. In the future, remote FLEX-6000 Signature Series radios will be equal partners in the SmartSDR ecosystem. Imagine the capabilities: Want to add two remote receivers so you never miss another check-in as Net Control? Just click to add and combine them. 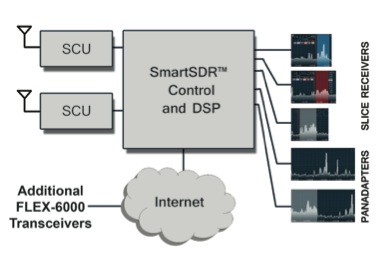 SmartSDR takes complex hardware and software and makes it elegant and simple to use. As smart phones and tablets have made computing devices accessible to the masses, the SmartSDR architecture truly delivers on the promise of a Software Defined Radio for the masses.

Just as FlexRadio set the standard for visual radio interaction, SmartSDR sets a new bar for visual radio display and control. Following the simple is better rule; we built a new graphical interface that is easy to learn and use. Multiple high-resolution, real-time spectral displays are at the heart of the SmartSDR experience. Intuitive controls are hidden from view to minimize clutter yet are instantly available when needed. 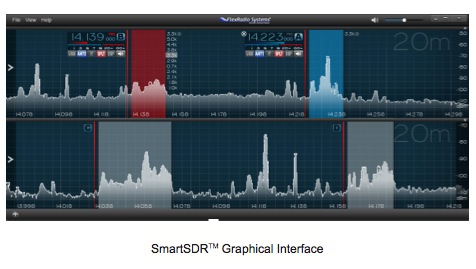 Networking is at the heart of the new FLEX-6000 Signature Series radios. From across the shack or across the world, these new radios are designed with the latest networking capabilities.
Each FLEX-6000 Signature Series radio is equipped with a 1GbE port for communication to existing PCs or other future display platforms. Initial software enables operation within the home network domain. Future releases will enable operation from any location in the world with an Internet connection. No external computer or expensive adapters are required at the radio site for remote operation.

What about sharing radios with your buddy, team or club? SmartSDR future releases enable multi-user sharing of radio resources at the station and across the net. Imagine multi-multi contest and field day stations that allow dynamic allocation of slice receivers from any workstation. Think of DX-peditions where isolated transmitters and receivers are connected to the operator’s logging stations with only Ethernet cable. And club members will be able to share the club station from their living room or pool side The FLEX-6000 Signature Series was designed with plug-and-play installation as a requirement. There are no drivers or interface cards to install. Just plug the radio into an antenna, power supply and network, load the SmartSDR software on your existing PC and operate.

The FLEX-6000 Signature Series achieves the ultimate goal of RF to bits at the antenna connector. Digital Down conversion (DDC) of the signal at RF, virtually eliminates the performance limitations inherent in legacy superheterodyne roofing filter based transceivers. Gone is the requirement for analog mixing and IF amplification stages that add images and intermodulation distortion. Eliminated is the need for expensive crystal roofing filters that add their own distortion and ringing. Direct digital receivers are simply quieter and less fatiguing to listen to over longer periods of time. 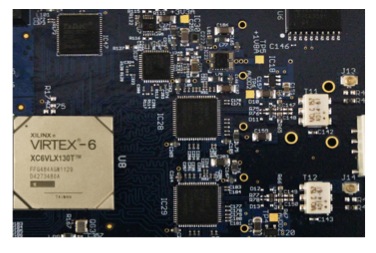 Weak signals near the noise floor are easier to copy due to the elimination of in-band phase distortion inherent in crystal filters. Since 100% of the receiver and transmitter mixing and filtering are done in the digital domain, unwanted sideband suppression, filter shaping, carrier suppression, and image rejection are no longer limited by non-linear analog circuits. Further, infinitely variable brick wall digital filters allow precise interference elimination without added distortion.

The FLEX-6700 and FLEX-6700R incorporate two independent, synchronous Analog Devices AD9467 16-bit 245.76 Msps (Mega samples per second) analog to digital converters (ADC) that allow direct digitization of the RF spectrum. Each of the two Spectral Capture Units allows simultaneous reception from their own respective antenna or the two can be optimally combined to deliver increased dynamic range. In addition, dual SCUs provide the capability for diversity reception, beam steering, noise mitigation, and multi-antenna monitoring. The FLEX-6500 is equipped with a single Spectral Capture Unit.
Not only is reception all digital; so is transmission. The FLEX- 6700 and FLEX-6500 transceivers incorporate an Analog Devices AD9122 16-bit digital to analog converter (DAC) operating at 491.52 Msps. Direct Digital Up Conversion (DUC) eliminates the traditional analog mixing and IF amplification, thus maximizing carrier and unwanted sideband suppression while minimizing spurious output and in-band intermodulation distortion.

Imagine up to 8 full performance receivers in one radio…

The FLEX-6700 transceiver and FLEX-6700R receiver each allow creation of up to 8 independent Slice Receivers providing reception from 0.03 MHz to 77 MHz and 135 MHz to 165 MHz. The FLEX-6500 allows creation of up to 4 Slice Receivers with tuning from 0.03 MHz to 77 MHz. Each Slice Receiver can provide independent spectral display of up to 384 kHz. Slice Receivers allow you to simultaneously visually and audibly monitor multiple frequencies within the same band or multiple bands. SO2R stations can chase multiplier frequencies while holding down a run frequency using a single radio. Now it is easy to watch for band openings across multiple bands from anywhere on the network. What about monitoring repeaters on 10m, 6m, and 2m at the same time? The possibilities are endless. 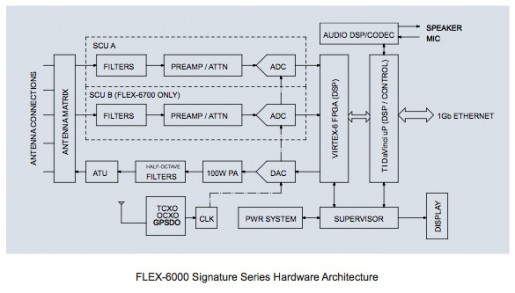 Direct RF to digital conversion allows the FLEX-6000 Signature Series to deliver up to +45 dBm (3rd Order Intercept Point) and 110 dB IMD DR3 (3rd Order Dynamic Range) inside the final filter bandwidth. This means that the FLEX-6000 Signature Series dynamic range is just as high at 100 Hz spacing as it is at 2 kHz spacing. This lets you work the pileups with ease and reduces auditory fatigue typically caused by in-band distortion in crystal filter based radios. Legacy multi-conversion, roofing filter architecture radios tend to “fold” and distort as the signal spacing is reduced near or inside the final filter bandwidth. That is why other manufacturers typically refer to dynamic range at wide tone spacing and some quote meaningless numbers without any reference at all.

Except for the most demanding large signal conditions, Slice Receivers are free to operate in wide-band mode without the need for RF pre-selection filters. This maximizes receiver flexibility with minimal impact to overall dynamic range. Optimally, when needed for increased out of band rejection, 10 Ham band, band-pass preselector banks are available on each Spectral Capture Unit. These filters incorporate mechanical relays and ceramic core inductors virtually eliminating distortion that can be caused by non-linear filter and switching components.

In all but the quietest rural locations, preamplifiers are not needed nor are they desired for typical HF operation. Since the FLEX- 6000 Signature Series ADCs are internally buffered, they can be connected directly to the antenna thereby maximizing large signal handling capability and spurious free dynamic range. Further, the dual Spectral Capture Units can be optimally combined on the FLEX-6700 and FLEX-6700R to increase Blocking Dynamic Range up to 3 dB and IMD DR3 up to 2 dB.

When RF amplifiers are needed, all models incorporate an Analog Devices ADL5201 Digital Variable Gain Amplifiers (DVGA) for each Spectral Capture Unit that is optimal for HF through low VHF. The ADL5201 provides -11.5 dB to +20 dB of gain in 0.5 dB steps with a 7.5 dB noise figure and a typical output IP3 of up to +50 dBm at 50 MHz. The 31.5 dB range of the DVGA’s digital input attenuator allows the system gain to be optimized for maximum dynamic range for the given band conditions. The FLEX-6700 and FLEX- 6700R also include an Analog Devices ADL5534 +20 dB gain, 2.5 dB noise figure, +39 dB output IP3 RF amplifier. On these models the ADL5534 can be switched in series with the ADL5201 DVGA with an optimal attenuation setting to adjust the noise figure for operation in the 135 MHz to 165 MHz range.

The FLEX-6000 Signature Series packs more built-in digital signal process power than ever before imagined in an amateur radio transceiver. The FLEX-6700 and FLEX-6700R weighs in at a massive 317 billion multiply-accumulate operations per second (GMACs) and 121 billion floating point operations per second (GFLOPS). The FLEX-6500 delivers 191 GMACs and 78 GFLOPS. This level of performance allows the FLEX- 6000 Signature Series to become a platform for amateur radio communication applications that were never before considered. 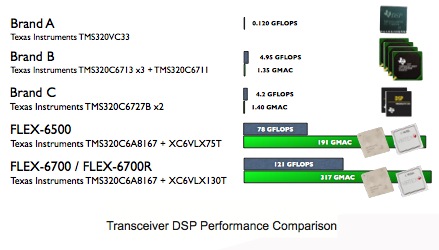 The FLEX-6500 and FLEX-6700 transceivers utilize FPGA hardware to directly generate the CW waveform digitally at the RF carrier frequency. This means that the RF carrier switches at hardware speeds without first element truncation as is typical in many radios. When combined high speed TR and bias switching on the PA,

A SmartSDR deserves a high performance RF power amplifier system designed to match. The FLEX-6500 and FLEX-6700 incorporate a push-pull pair of rugged RD100HHF1 MOSFET transistors operating at 13.8V DC. The FLEX-6500 and FLEX- 6700 both include an automatic antenna tuner capable of tuning antennas over 10:1 range (3:1 on 160m and 6m). Both models provide an unprecedented 11 half-octave low pass filter banks to allow continuous coverage for MARS operation. Two 80mm quiet, temperature controlled fans pressurize the enclosure to force air through the PA heat sink fins and out through the back panel.

The FLEX-6000 Signature Series is the first amateur radio product family to offer an optional built-in GPS Disciplined Oscillator (GPSDO). The GPSDO plug in module provides a precision 10 MHz reference for the 983.04 MHz master oscillator and to a rear panel 10 MHz SMA output connector for external precision frequency control. Frequency stability is 1 x 10-8 within 5 minutes at 25° C and 5 x 10-12 over 24 hours with GPS lock. Rear panel SMA connections are provided for the GPS antenna input and 10MHz reference output. 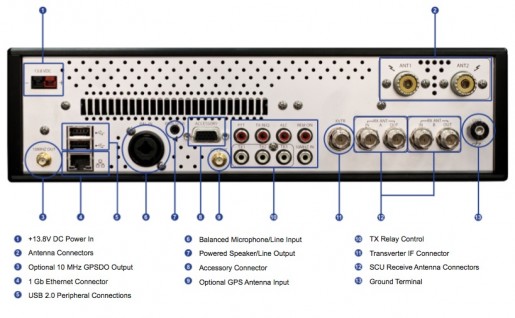 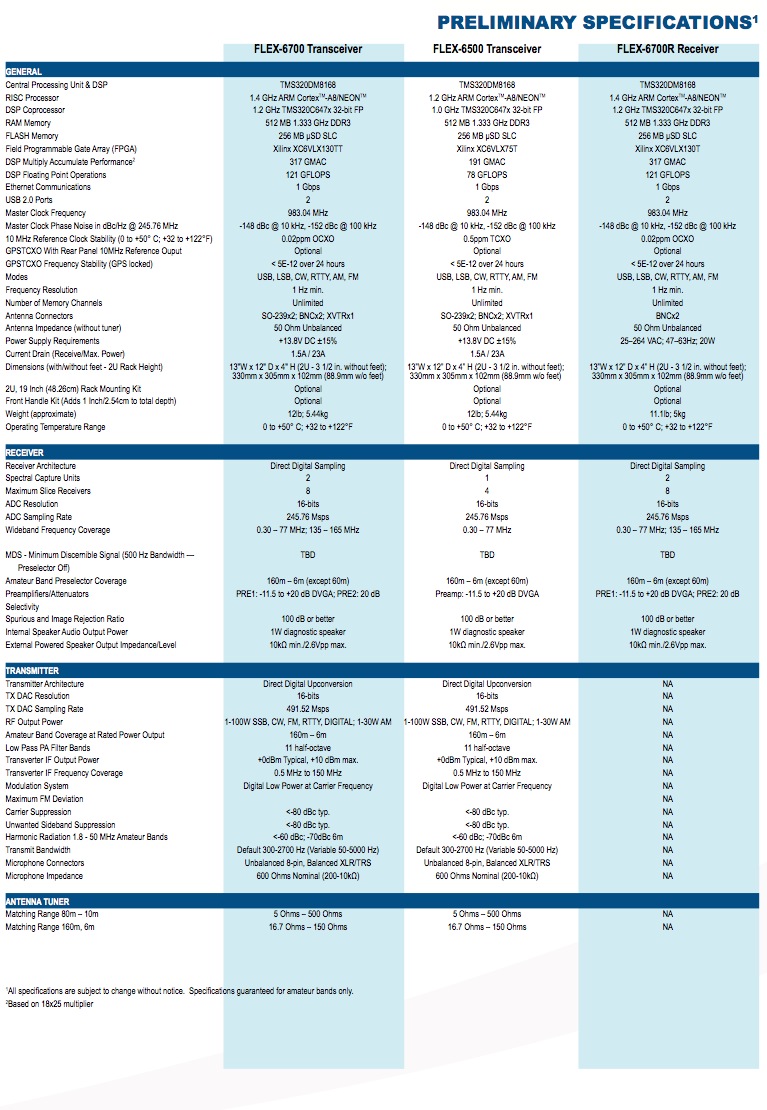