ShackLan4 is a simple yet powerful and flexible control system designed specifically for automating antenna swithing and station functions. The system is easily expandable and can be used in a simple station consisting of a single radio with a handful of antennas all the way up to multi-radio, multi-tower contest stations.

It is an RS-485 based system that distributes power and data to each device in the system via a 4-wire cable. Since power is distributed via the ShackLan4 network cabling, external power need be connected to only one device, eliminating the need for many power cables and reduces wiring “rats nests”. Connection between devices is done with a standard RJ-12 modular (telephone) connector using 6-wire modular cable (2 wires each for power and ground). For convenience, connections to antenna switches are done with a 4-pin removable screw terminal plug. Show below are some typical installations. 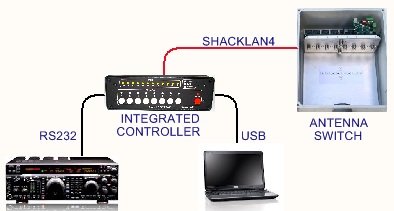 Do you already have an antenna switch such as the Array Solutions 6-Pak or Rat-Pak? No problem! Shown at the left is a ShackLan4 system configured to automate an existing antenna swith using our UBC-12 Band Decoder and our RD-16 Relay Driver which provides up to 16 outputs that can be configured in any combination for each band.

As in the above example, an RS-232 or Icom CI/V to USB interface is built-in. The same configuration can be easily expanded to a two radio setup by simply adding another UBC-12 Band Decoder as shown below. In addition, bandpass filters are usually required for two radio operation. 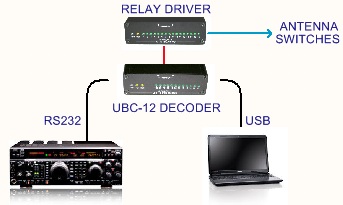 In large stations with multiple radios, antenna switches, stack matches, bandpass filters, etc. the amount of control units and cabling can quickly get out of hand. A simple yet extremely flexible and elegant solution is to use our ShackLan4 Control Center software. It is designed to be used on a small touch-screen display but works equally well on a standard computer display.This implementation eliminates the need for antenna switch controllers, stack controllers and other miscellaneous control units thus removing a lot of clutter from the operating position.

It also makes the station much easier to operate for guest operators as only available antennas for each band will be shown for the current band. The only control units required are a UBC-12 Band Decoder for each radio and one ShackLan4 USB Interface unit for each computer running the Control Center software. Each implmentation of Control Center can be configured for one or two radio operation. Up to eight antenna selections are available for each band and each antenna selection does not have to be a separate antenna. For example, a stack of two yagis can be configured as three antenna selections, Upper, Lower and Both. Shown below is an example of an installation in use at one contest station. 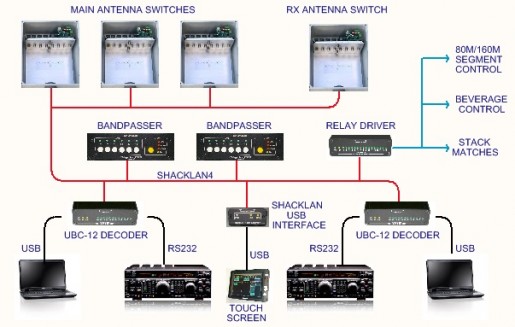