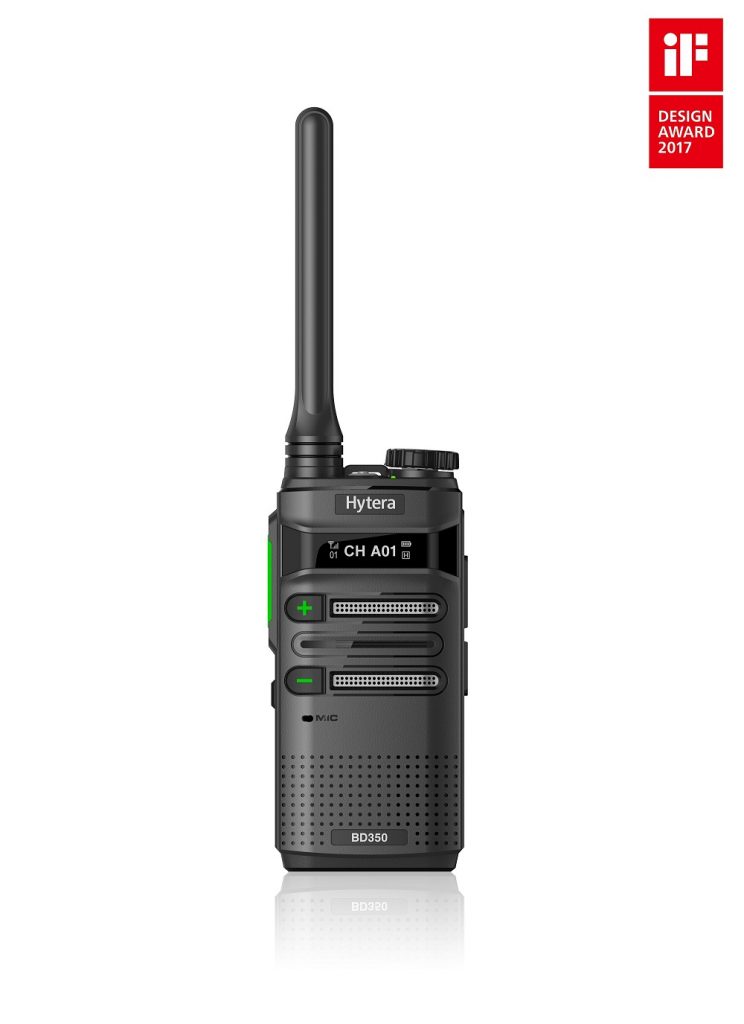 Hytera BD35X, a commercial portable radio with sophisticated and ease-to-use design, stood out of 5500 competitive works from 59 countries winning iF Design Award 2017.

Designed to enhance communications for those working in sector of retail and hospitality, Hytera BD35X has an ultra-slim, compact and rugged profile, fitting comfortably in hand palm for one-hand operation. The green and black push-to-talk button reflects high-visibility, making it easier to spot it in any light conditions while embodying the brand identity.

The initial release of BD series includes 4 models, BD30X, BD35X, BD50X and BD55X, which adopt two-slot TDMA technology, and provide output power from 2 to 5 watt and capacity up to 256 channels, with compact and lightweight design. Working in either analog or digital mode, this entry-level DMR series is a perfect choice for users who simply need voice communications or need to replace their aging analog radios due to local mandates, as well as for users who want to get their hands on better communications tools with limited budget and spectrum resources.

“It is not just about the launch of a new product series, but how to popularize the digital technology and encourage the customers to experience the convenience and efficiency brought by digital,” said G. S. Kok, Senior Vice President and terminal chief of Hytera, “The way is to provide better products that can meet customers’ need and consistently enhance current products to improve users’ experience.”

In the meantime of BD series’ launch, Hytera has completed the enhancement of its existing PD3/4/5 series by adopting new hardware and releasing up-to-date versions of software to enable more data features, such as radio registration service, encryption and roaming. PD5 series now can tap into Hytera XPT Digital Trunking, which used to be the privilege for higher tier terminals such as PD6/7. “The upgraded PD3/4/5 series have a substantial enhancement in terms of functionality, which will be a big move, opening the doorway to activate more practical data services and applications for our customers,” said G. S. Kok.

Besides the introduction of entry-level series, and enhancement of mid-tier radios, Hytera has launched its flagship DMR model PD98X earlier in August. The PD98X offers an exceptional audio experience through noise cancellation technology, while offering new features including full duplex call, recording capability via Micro SD, Bluetooth 4.0 for audio or data, and single frequency repeater mode to increase coverage. This flagship DMR radio was adopted by the security staff to secure the G20 Summit on September 4-5 in China’s eastern city of Hangzhou.

“The PD98X is a significant addition to our top-notch DMR portfolio. We have succeeded in integrating a series of cutting-edge innovations and designs into this new model to make it a full-featured radio to satisfy customers’ increasing demand in terms of functionality and user experience,” said G. S. Kok, “Hytera now offers PD70X, PD78X, X1e, X1p and PD98X in the high-end category for the professional users, as well as intrinsically safe versions in this category.”

Since launching PD7 series as the first members of its DMR portfolio in 2010, Hytera has driven a massive analog-to-digital migration among two-way radio users across the world, and kept promoting the European Telecommunications Standards Institute (ETSI) DMR open standard by introducing new terminals, infrastructures and applications. Hytera vigorously invests in R&D, propelling itself to be No. 1 in DMR Tier III with 65% market share and No. 2 in DMR terminal in general among all PMR brands.

“I think the DMR revolution is only half-way through. I don’t think we’ve seen the end of DMR, mainly because I look at the migration of analog to digital, and it’s only half done. So if DMR is the replacement for analog, my guess is that we are only halfway through.” G. S. Kok gave his comment during a recent talk about the future of PMR industry.

“In 2016, we have introduced the entry level BD series and flagship model PD98X, and enhanced the mid-tier models. With another ia-level Zone 0 applicable intrinsically safe portable radio being certified and to be released soon, Hytera literally regenerates its DMR terminal portfolio. The introduction of BD series will give another boost to the migration trend,” said Dylan Liu, International Marketing Director of Hytera.