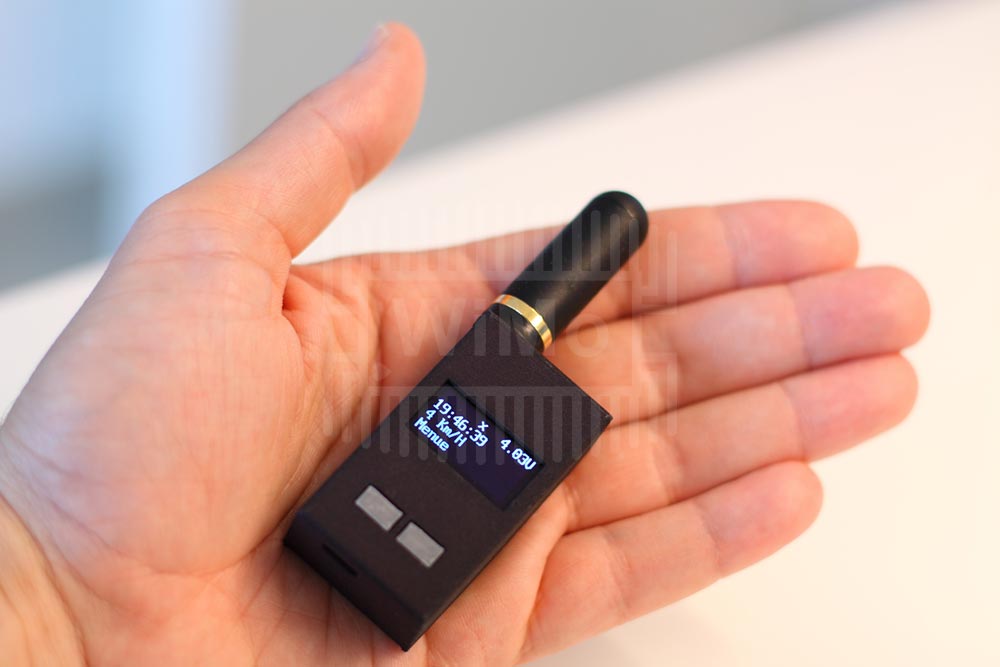 The transceiver can not only be used as APRS tracker, but also as receiver for APRS data. The graphical OLED display (128×64 pixel) shows received APRS position reports, APRS messages and status information. When receiving position reports the distance and direction to the sender is shown.

The own GPS coordinates are also shown, allowing the PicoAPRS to be used as a GPS redceiver as well, for example for Geo Caching.

All handling is done with two push buttons. With the help of a versatile menu system the transceiver can be individually configured and operated without using a computer.
The transmit power is approx 1 Watt and can be switched down to 0.5W. The own position data is transmitted as a compressed MIC-E APRS message to keep transmit duration as short as possible. This also helps to save battery power. Of course received messages in compressed MIC-E can be decoded and displayed as well.

The built in 850mAh LiIon battery allows operation of approx 10 hours. The HF receiver can be deactivated to save power, the Pico-APRS then functions as a pure GPS tracker. To extend battery lifetime even further the GPS receiver can be turned on and off in programmable intervals.

The built in micro USB conenctor is not only used to charge the built-in battery, but also for upgrading the firmware and to communicate with the main processor. This opens the road to further development of the Mini APRS transceiver, for example as a GPS mouse for the computer. More applications are under development.

The transmitter utilzes a 7-pole low pass filter to suppress unwanted harmonics. The main processor is well known from the Arduino world, it’s an ATmega 1284p. The current software uses less than one third of the available memory, this allows for a lot of further developments in the future.

The tiny size of just 30 x 56 x 22mm is close to that of a matchbox. The weight (without antenna) is just 45 gram. This is perfect to carry the Mini APRS Transceiver with you all thetime, whether on a hiking trip, on a journey with your bike or boat or even when skiing.

STANDALONE APRS LAN I-GATE
Overview of the I-GATE functions. Extruded aluminum housing with stamped and printed front. At the back all the necessary connections and power. Ent? Processor board, with internal 1200 baud modem...