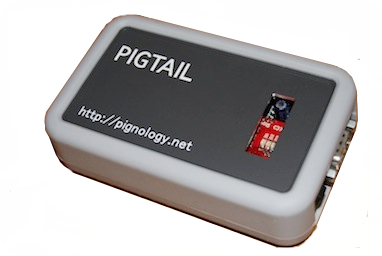 Pigtail is a device that interfaces amateur radios to the popular logging HamLog on Apple’s iOS operating system. HamLog is a full featured logging app that’s been in constant development since March 2009. The Pigtail as well as HamLog was designed for amateur radio operators that take their radios out of the shack, to parks, hotels and mountain tops but still prefer a full-featured, software based logging experience.

The Pigtail device uses Wi-Fi, to expose its built-in serial port via a network connection and operates from a 9V battery or an optional, user-modifiable power connection. The Wi-Fi connection can either be Ad-Hoc or Infrastructure so it can operate stand-alone, without a wireless access point. It includes a custom milled, silk screened enclosure with a protective silicone cover and an acrylic window to view the status LEDs. Rig support includes popular radios from Elecraft, Yaesu, Icom and Kenwood with new radios being added as they’re tested.

The device works great for managing any serial connected device. For example, it can be used with a computer that is lacking a built-in serial port to manage networking eqiupment. Simply place the computer and the Pigtail on the same Wi-Fi network, or create an adhoc network, and telnet to the Pigtail to talk to it’s serial port.

There are currently two Pigtail versions, v1 and v2. The primary difference between the two is the addition of some jumpers. One of those jumpers enables support for Kenwood radios. The v1 Pigtail PCB requires a small hardware modification to support Kenwood radios, soldering a jumper between two pins of the 2×5 DB9 header. The jumpers and their differences are deatiled here. Version 2 also breaks out some of the GPIO pins from the wifi module for users that want to experiement. They’re not needed for regular Pigtail use.