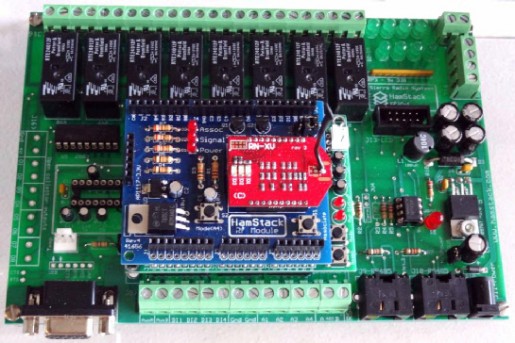 Sierra Radio Systems has teamed up with Pignology to bring remote station control and monitoring to your iPhone !

Pignology’s HamLog is one of the most widely used Iphone apps for ham radio. HamLog features a full blown logging program and dozens of useful tools including call sign lookup, grid square calculator, propagation data, band plans and now… The HamStack Lite remote control panel that can control your HamStack StationController from across the room with an ad-hoc WiFi network connection or from around the world through the mobile phone network.

Every few seconds, the StationController sends the iPhone the input logic states and the A/D voltage values. The update interval is programmable. An additional text status field (the green square) can provides periodic system status updates in text. 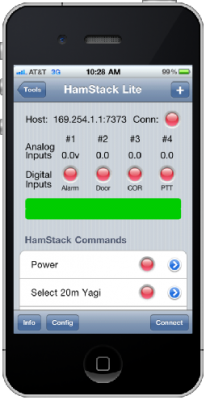 At the bottom of the screen are the user programmable buttons. Up to 8 buttons can be configured to send any command string to the StationController hardware. The default configuration sends the relay toggle (turn on / turn off) command every time the button is pressed allowing you to control all 8 relays and get a real time update of the relay state indicated by the red or green LED on each button. Two buttons are shown in the picture. Simply scroll the button window to see the the other 6 buttons.

The StationController combines the HamStack GPIO board, a HamStack CPU board, a WiFi module and special remote control firmware. The GPIO board features 8 digital outputs connected to 8A SPDT relays, 4 digital inputs with built-in pull up resistors and 4 10-bit A/D converter inputs with optional voltage dividers to allow measurement of 0-5 or 0-22v DC.