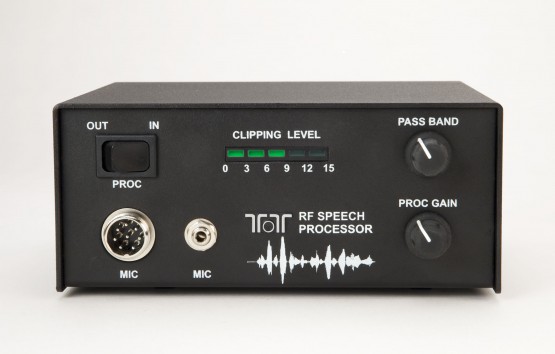 This power increase, coupled with the ability to tailor the speech passband can mean the difference between a signal buried under band noise or an intelligible, copyable signal.

The 715 RF speech processor is installed between the microphone and the microphone jack on your transceiver. Two inputs for microphones are provided. A conventional 8 pin microphone connector that is wired the same as the 8 pin microphone input on the Omni-VII and Orion II transceivers (also wired the same as 8 pin Yaesu connectors), and a second 1/8” input used for direct connection of microphones or headsets like Heil Sound, etc. The output connector is a 1/4” stereo connector. Output cables are available for 4 pin Ten-Tec, 8 pin Ten-Tec (also used by Yaesu), 8 pin Kenwood (also used by Elecraft), 8 pin Icom.

AF clipping or compression processors found in a typical HF transceiver typically create distortion consisting of harmonics and IMD products. An RF speech processing system converts the input audio signal to an RF SSB signal. It is then clipped, fed through a ceramic filter and returned to audio, effectively removing harmonic distortion that would have been present in an AF system.

Model 715 takes the input audio signal, converts to a 455 kHz DSB signal, removes the opposite sideband and limits distortion products with filtering before returning the resulting signal back to audio for output to your transceiver.

Why use an RF speech processor? Several reasons, all related to signal copyability. The increase in average power output between a non-processed and a processed signal under marginal band conditions can be enough to make the difference between being heard and not being heard. During DXpeditions or contests, the goal is to be heard before everyone else or through a pileup. Maximizing average power output whether you are running barefoot or using an external linear amplifier is a paramount consideration. Why not take full advantage of the allowable legal maximum power output? Much of average power is lost as high amplitude, low energy voice peaks. Increasing average power by a few dB is like having an extra amplifier or a better antenna available than what you are currently using.

iSpectrum Analyzer – Macintosh Audio Spectrum Analyzer
iSpectrum is an easy to use audio spectrum analyzer that allows the user to view live audio in a standard frequency plot, a stereo oscilloscope view and a waterfall display. The user can adjust the display...