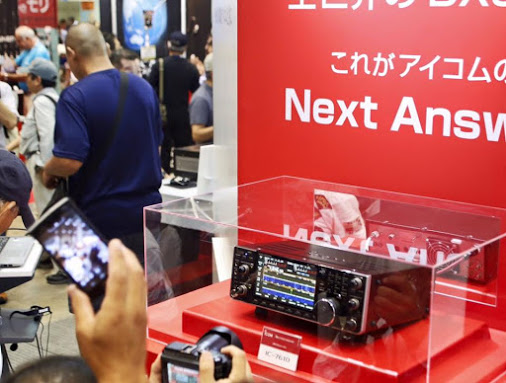 IC-7610 HF/50MHz Transceiver (Base Station)
The IC-7610 is the successor to the IC-7600 and will be a dual-watch capable HF+50MHz 100W base station with built-in antenna tuner. The LCD will be touch screen and you will be able to connect an external display.

IC-R8600 Wideband Receiver (Base Station)
The IC-R8600 replaces the IC-R8500 wideband receiver and will feature the technology incorporated into Icom’s best selling IC-7300. The IC-R8600 will be able to receive a wide frequency range from 0.01-3000MHz frequency in analogue and various digital modes (D-STAR, P25, NXDN and dPMR). The IC-R8600 will feature a larger 4.3 inch touch screen display which will feature fast moving spectrum scope and waterfall display.

IC-R30 Communications Receiver (Handheld)
The IC-R30 is the successor to the popular IC-R20 compact handheld receiver. The IC-R30 can listen to two signals under certain conditions (analogue + analogue or analogue + digital). The IC-R30 will be able to decode D-STAR, P25, NXDN and dPMR digital (conventional) modes.

ID-51 PLUS2 Dual Band D-STAR Digital Transceiver (Handheld)
The ID-51 PLUS2 handportable is a special edition model which will come in several colours/patterns. The new ‘Terminal Mode’ and ‘Access Point Modes’ enable you to make D-STAR calls through the Internet, even from areas where no D-STAR repeater is accessible.

ICOM IC-705 HF/VHF/UHF SDR Transceiver
A new hybrid radio. Base station radio performance and functions are packaged in a compact and lightweight portable size. Whether you are taking your hobby to a SOTA, POTA, or some other "On the Air"...