NW Digital Radio introduced the UDR56K-4 Universal Digital Radio at the annual gathering of Amateur (Ham) Radio enthusiasts. The radio, which has been designed to support digital data and digital voice needs of both amateur radio emergency service teams and digital radio experimenters The radio will support data rates from 4800-56K+ bps with selectable modulation methods including GMSK, FSK, and 4FSK. The UDR56K will operate in the 70cm band (420-450 mHz.) at up to 25 watts.

Bryan Hoyer (KG6GEU), President of NW Digital Radio said, “The UDR56K is a radical departure from legacy commercial radio offerings and brings a new, open platform, to the Amateur Radio community by providing a stable, integrated, software managed radio for digital communications combined with a tightly integrated Linux based computing platform in a compact package.” 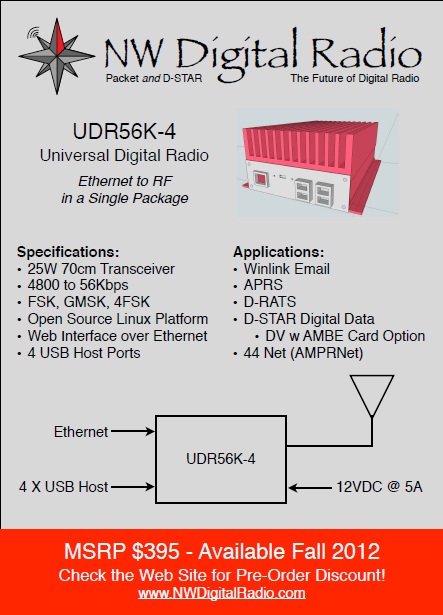 The radio, which measures 4?6 inches and is topped with an eye-catching red colored heat sink, has none of the usual knobs, dials, buttons, or switches. It has one Ethernet jack, four host USB ports, power, and antenna connections. All radio functions are controlled by software, using either a web browser interface or custom application.

NW Digital Radio has already integrated the Radio Messaging System (RMS) and D-STARi gateway and controller software. They are also in talks with noted software developers to provide additional digital radio protocols and applications on the UDR56K platform. Common Linux applications are easily installed using package management tools or may be compiled for the radio. Some applications of interest to the amateur radio community have already been tested, such as AX.25 networking, gpsd, Xwindows, bluetooth integration, wireless 3G/4G broadband, USB sound, and others.

“As we have talked to amateur radio operators, who are interested in digital communication for emergency communication or the development of new protocols, vocoders, and networks, there has been universal excitement for the UDR56K,” according to John Hays (K7VE), Director of Marketing. Mr. Hays further noted that “Many have said, ‘can we pay now, to be at the front of the line?’”

Mr. Hoyer added, “We think we have a winner in this design, and anticipate a series of new products from our company. We want to build on the resurgence of ‘do it yourself’ activity. We will put the Amateur back in Amateur Radio!”

This device is not offered for sale, pending certification and approval by the FCC. 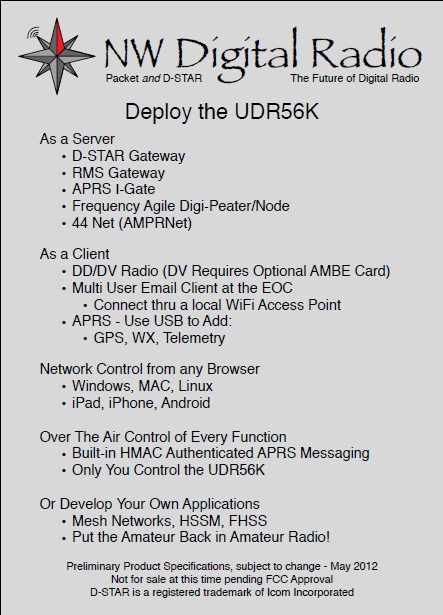 The UDR56K-4 has an anticipated release in the 4th Quarter of this year, with a target MSRP of $395.

D-STAR is a protocol of the JARL and is also a trademark of Icom Corporation.