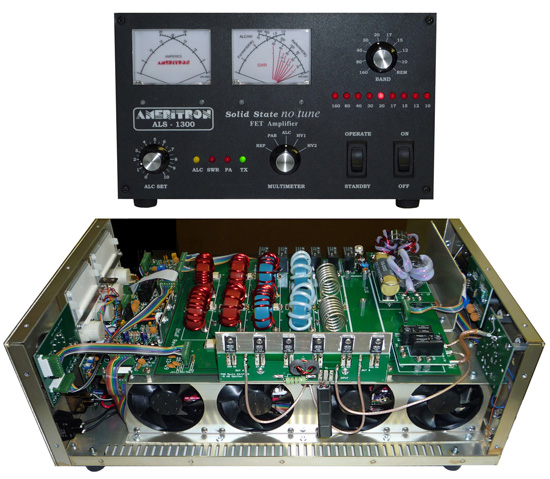 AMERITRON ALS-1300 is a solid state near legal limitTM FET no-tune Amplifier. Get instant bandswitching, no tuning, no warm-up, no tubes to baby and no fuss!

Reliability of the ALS-1300 is insured by using eight rugged MRF-150 power FETs. Ameritron’s eight FETs are mounted on the dual heavy duty heat sink. They are properly arranged to spread out the heat over a large surface, something that other amplifiers using a single power device cannot do. Some FETs actually are a package of several transistors in one large case. This concentrates all of the heat in one small package. They not only are more difficult to cool, if one transistor fails they all have to be replaced.

ALS-1300 runs up to 1200 Watts of clean SSB output power (just 100 Watts drive gives you the full rated 1200 Watts output) for continuous coverage between 1.5-22 MHz. 10/12 Meters available to licensed amateurs with an optional kit (MOD-10MK). Must present FCC license at time of sale.

Enjoy 1200 Watts of no tune Solid State power with the Ameritron ALS-1300 amp.

The Automatic Band Switch reads band data from your transceiver and automatically changes the ALS-1300 bands as you change bands on your transceiver. A superclean layout with easy-service modular construction will give you years of operation.

ALS-1300SPS Power Supply
The ALS-1300 is powered by a 50 VDC switching power supply.Comes with pre-wired cable to plug into the ALS-1300.