Amateur Radio in Play in Aftermath of Nepal Earthquake 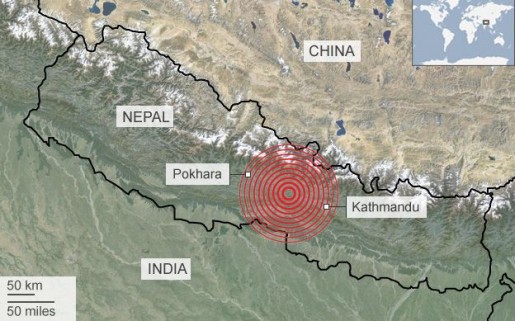 At least one HF net is reported to be handling emergency and relief-related traffic in the wake of a devastating and deadly earthquake in Central Nepal. The magnitude 7.9 quake on April 25 caused landslides on Mount Everest during the climbing season, killing an unknown number of mountaineers and stranding others. A strong aftershock hit April 26. So far, some 2200 people are reported dead. The earthquake hit an area between the capital city of Kathmandu and the city of Pokhara. An emergency net has been running around the clock on 20 meters (14.205 and/or 14.215 MHz), with Jayu Bhide, VU2JAU/AT150ITU, as net control station and other stations in India participating). The net has been attempting to organize relief logistics. Amateur Radio DX.com also has reported activity on 7.100, 18.160 and 21.360 MHz.

Running just 25 W from solar power, Satish Kharel, 9N1AA, was reported to be coordinating his activity with Nepal police and sharing duty with Suresh Upreti, 9N1HA. Both are in Kathmandu. Amir Bazak, 4X6TT, in Israel joined the net and helped to keep the frequency clear. “Our stations are working with no break,” said Bhide, who is Amateur Radio Society of India (ARSI) National Coordinator for Disaster Communication.

Nepal’s first Amateur Radio repeater, set up in 2012 by the National Society for Earthquake Technology (NSET), and at least a dozen ham in various locations were reported on VHF. The 9N1KS repeater (434.500 MHz in/145.000 MHz out) is on the NSET headquarters building on the outskirts of Kathmandu. A drill conducted in 2012 indicated good coverage of the Kathmandu Valley.

The US chapter of the Computer Association of Nepal provided technical and financial assistance for the repeater and supplied equipment to use it. The repeater has a battery back-up power source.

The NGO “Humanity Road” is maintaining an updated summary of damage as well as immediate needs.