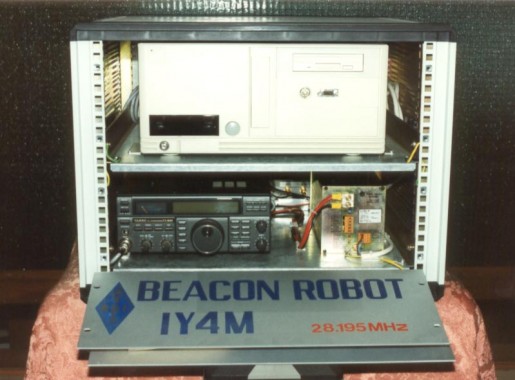 The “Beacon Robot” is a new project born after the experience achieved on the realisation of the previous “Beacon IY4M”, operating on the same frequency since 1985.In the last version, we have added many new features, upgrading the controlling software and hardware, according to the most modern digital techniques. Now the user can have an easier and wider interactive access to the system, trough many more CW command keys.

We have designed and built the new Beacon station, as radioamateurs, who want to follow the ingenuity of the experimental work made by Guglielmo Marconi, from the same site where, a long time ago (1895), he started the world-wide telecommunication era. With this in mind, we have presented this project to the “International Radioamateur Convention”, held in Bologna, October 1995, on the first centennial of the invention of the radio.

Output power:
Fixed at 32W during identification. It can be varied in 3 dB steps from 32 down to 0.125W, at user command.

TNC:
PACKET communication module at 1200 bps SSB, only from the controlling station.

Callsign Database Capacity:
2500 callsigns, with operator’s name and date of the last QSO.

Command keys:
44 commands in CW for users, 68 commands in PACKET, only for the control station.

Stand-by period:
after every ID cycle, the Beacon Robot is switched into the receiving stand-by mode, for 30 seconds.

Functional goals:
Monitoring of the long range propagation of radio waves in the amateurs band of 10, 12, 15, 17m.
Careful determination of the user’s antenna pattern and receiver S-Meter scale, through the accurate calibration of the signal strength received by the Robot and of its output power.
Versatile operation of many different features.
Archive of more than 2000 QSO, each recorded with all their relevant data.
Broadcast of general interest messages.
Celebration of the experimental work done by Marconi.

Every 30 seconds the Beacon sends its identification message. This could start with a general interest message, if this has been scheduled to happen at selected times from the controlling station.

After the Beacon switches into the STAND-BY mode, it is open to receive user’s CW command keys for an interval time of 30 seconds.

First, it is needed to allow the recognition of the user’s CW speed, which has to be within 50 and 300 characters/min. To do so, the same letter, a “V” for example, should be repeated a few times before sending the first command.

It is compulsory to terminate every command key with the letter “K”; this character has also to be sent well separated from the previous command key. If the command key is not recognised, the Beacon replies with “? ?”. Then the command can be repeated (don’t forget the final “K”).

The Robot answers at the same speed of the current user, provided that it is not issued a command to change it.

List of the command key codes, available to the user, in CW:

Request to send back the signal strength received by the Robot.

The Field Intensity scale is limited between 0 and 54 dBuV.

To activate this function, after the beacon reply “R R”, the user has to transmit a series of dots or dashes or a continuous carrier, for at least 5 seconds, but no more than 10 seconds.

Request to set the receiving frequency, for 10 seconds, within the following limits:

The signal intensity (in dBuV), received on that channel along those 10 seconds, is sent back on the nominal output frequency of the Beacon (28195.00 kHz). The decimal point can be entered as the character “point” or “comma” or “R” (for example 28005R5).

Request to transmit info and operating conditions of the BEACON as:

Request to send the list of the last 5 QSO.

DD = day of the month

CALL= callsign of the user station

BB = frequency band where the user has been received

Request to set the Beacon output power at the level of the following table:

These are 9 levels in 3 dB steps. The absolute calibration is checked two times a day. The output power is reset at the maximum level at the beginning of each Identification Cycle.

Request to set the output power at 32 W.

Request to set the output power at 8 W.

Request to set the output power at 1 W.

Request to slow down the beacon CW speed of 25% with respect to the user speed. This command can be repeated, to get still lower speed.

Request to rise the beacon CW speed of 25% with respect to the user speed. This command can be repeated, to get still higher speed.

The Robot speed is reset equal to the user’s CW speed.

Request to know the user’s signal strength in S-units, as received by the Robot. Same procedure as with the DBM command key.

Similar to the DBM “freq.” Command key. The value returned is the signal strength of the user on the frequency “freq”, in S-units, instead of dBuV.

Request to send a sequence of different output power levels, from 32W down to 0.125W, in 3dB steps. Each level is identified with a number from 1 to 9 (see the previous command key “PWR”) and lasts for a few seconds.

The Beacon output frequency is moved for a while in the selected band (12, 15, 17 metres), where it sends a short version of the ID message, like with the command key “QTG”. The actual frequencies on each band are chosen by the control station, which can also disable this feature.

Request to know which QTC are available. The QTC messages are recorded by the controlling station and numbered from 0 to 9.

Request to transmit for a few seconds a short version of the ID message, with the current output power level.

Request to transmit the LOCATOR and the name of the site where the Beacon is located.

Request to send the Beacon date and time, kept within a few minutes from UTC by the controlling station.

Request to send the value of the internal temperature of the unit and the external ambient temperature, in °C.

Request to send the CW speed of the user, in words per minutes (WPM) and the dot/dash ratio of the characters.

How to make a QSO with the BEACON ROBOT:

The QSO with IY4M is quite similar to a conventional connection with any radioamateur. It can proceed in a few different ways, with the exchange of signal reports, which are finally recorded in Beacon logbook.

After the Beacon has transmitted its ID message, and you have got the recognition of your CW speed, send this start sequence:

If your callsign is not properly received at the first trial, the start sequence can be repeated, with just one callsign, instead of two. After the “IY4M” you are also allowed to add a dummy “de”, if you like.

Before starting a new QSO, the Robot has to recognise at least two times the same callsign. Any new entry is first checked against simple acceptance rules, to reject the “impossible” ones, also if they are repeated many times. In case of doubt, the Beacon replies “?? PSE AGN”, asking for a new entry.

All uncertain callsigns are collected anyway, up to the last 16. The validation of a new entry can then make also use of this temporary list, or of a database of up to 2500 old confirmed callsigns.

Only when the Beacon is sure of the user callsign, the QSO proceeds.

· a welcome message is sent to the user; if the callsign database contains a record of the user’s callsign, the message refers also to the last QSO with the Robot and to the operator’s name (if this info is already available);

· if the operator’s name is not available, you can (optionally) send it for at least two times, at the Robot request (remember to add the final “K”);

· now the Robot waits for a continuous or intermittent signal, lasting for at least 5/6 seconds, to measure the user’s signal strength; the RST report is then transmitted by the Robot;

· the QSO is closed with various information and greetings, some in the mother tongue of the user.

To give a more human feeling to the QSO, the Robot selects at random the actual text of the answer among different options. There are two types of answers: verbose and quick. The longer expressions are used for the first QSO in the day with a particular user, while the shorter ones for all the following QSO.

The Team responsible for the Beacon Robot is committed to send a special QSL card to all the SWL reports and to all callsigns who had a successful QSO.

The present version of the software is open to further improvements and modifications, according to the experiences we will gain along the use of the Beacon Robot and the suggestions the users will let us now. Last updates will be available in real time to all users as QTC messages.

[…] Gert Carlsson, AA7G sends along this information on the IY4M interactive beacon robot: http://www.cqdx.ru/ham/ham_radio/iy4m-marconi-cw-beacon-robot/ Mark Lunday, WD4ELG of Greensboro, North Carolina reported on June 9: “I am here in my shack […]