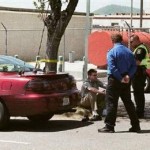 The Ohio man arrested with a loaded handgun at Asheville Regional Airport as President Barack Obama was leaving on Air Force One was an honor student described as a “good kid” by family and friends.

That hearing came also as authorities were continuing to investigate whether McVey had posed any real threat to the president, or whether that had even been his intention.

McVey had a previous brush with law enforcement in January when he was detained at gunpoint following a roadside argument in Ohio in which he was carrying a loaded sidearm, according to documents obtained by the Citizen-Times.

Police arrested McVey at the airport Sunday and charged him with going armed to the terror of the public, a misdemeanor that carries a maximum sentence of 120 days.

Federal authorities after the court hearing lifted a hold they had placed on his release, which would allow McVey be freed on bond. He remained in custody Monday evening.

McVey told police he was parked near a gate at the end of the terminal that led to the runway as Air Force One was taxiing because he wanted to see the president.

Police started questioning him after noticing the car’s Ohio license plate and equipment, including a digital dashboard camera and multiple antennas. He got out of the car talking on a handheld radio linked to a remote earpiece and wearing a sidearm.

Taken individually, none of things McVey did was against the law, including carrying the gun, Airport Police Chief Jeff Augram said. It was the combination of McVey’s behavior and the things he had that drew the charge, Augram said.

Going armed to the terror of the public, means carrying a gun, “for the purpose of terrifying others,” according to a firearms law manual from the N.C. Attorney General’s Office.

KJ6CEY was arrested again for pointing laser at fire engine
A 31-year-old San Jacinto (KJ6CEY) woman was behind bars for a second time after allegedly pointing a laser at a firefighter behind the wheel of a fire engine. Irene Levy's colorful history makes...