Professional storm chasers Tim Samaras, WJ0G, his son Paul Samaras and fellow investigator Carl Young were killed on May 31 near El Reno, Oklahoma when an EF3 tornado suddenly changed paths and slammed into their vehicle; they were unable to escape. According to ABC News, Tim Samaras — an ARRL member — was found dead in his car, still in his seat belt; Paul Samaras and Young were pulled from the car by the tornado; one of the men was found a half-mile away. 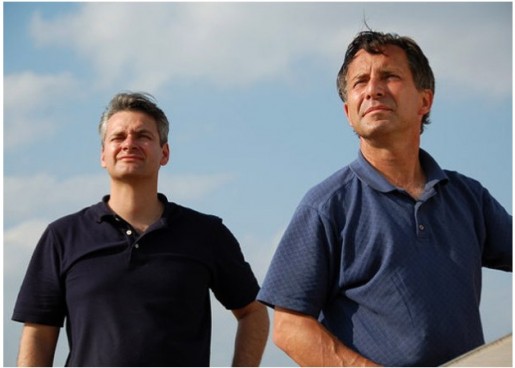 Carl Young (left) met Tim Samaras, WJ0G (right), while attending a meteorological conference. Samaras encouraged Young to collect meteorological data from inside tornadoes as the principal focus of his thesis research. Since spring 2003, Samaras and Young have tracked down more than 125 tornadoes. [Photo courtesy of The Discovery Channel]

National Geographic Society Vice President for Research, Conservation and Exploration John Francis told The Washington Post that he fears that there are too many people jamming the roadways in pursuit of twisters and that this might have contributed to Friday’s fatalities. In a May 2013 online interview with National Geographic, Samaras told of the increase in the number of storm chasers in recent years. “There’s lots and lots of storm chasers out there, but you can probably count on one hand the number of people who go out into the field and collect data from tornadoes,” he said. “We run into [storm chasers] all the time. On a big tornado day in Oklahoma, you can have hundreds of storm chasers lined up down the road. Oklahoma is considered the Mecca of storm chasing. We know ahead of time when we chase in Oklahoma, there’s going to be a traffic jam.”

The Samarases and Young were with TWISTEX (Tactical Weather Instrumented Sampling in/near Tornadoes EXperiment), a scientific field research program founded by Tim Samaras to “better understand tornadogenesis, maintenance and decay processes and to gain insight and knowledge of the seldom sampled near-surface internal tornado environment.” The TWISTEX team has been featured on The Discovery Channel’s Storm Chasers. Tim Samaras holds the Guinness World Record for recording the greatest pressure drop ever measured inside a tornado (100 millibars near Manchester, South Dakota on June 24, 2003) and is the only person to ever record video from inside a tornado.

In his biography on The Weather Channel’s website, Tim Samaras said that he used Amateur Radio equipment when he chased storms. “Being that we are on a scientific mission,” he explained, “we carry about 8-10 probes, along with other weather instruments, cameras, laptops, GPS navigation, cellular telephone, ham radio equipment (I’m a ham radio operator), first aid kit — in case we come across tornado victims (most of our crew is first aid trained), tools, winches, saws…well…the whole garage.”

On the Weather Underground blog, Jeff Masters discussed the confluence of factors that might have contributed to Friday’s tragedy. “Tornadoes by their nature are unpredictable, and can change course unexpectedly, or pop up suddenly,” he wrote. “It’s particularly dangerous when a tornado is wrapped in rain, making it hard to see, or if a chaser is operating in a heavily populated area, where roads may suddenly become congested. All four of these conditions occurred Friday during the El Reno tornado.”

“I chase the most powerful storms on the planet,” Tim Samaras said in a video on his personal website. “All my life I’ve been on a quest to figure out how these things worked. Tornadoes have represented the biggest challenge as they are very fleeting in nature and extremely difficult to pinpoint their proposed destruction…At times I have mixed feelings about chasing these storms. On one hand they are incredibly beautiful; on the other hand, these powerful storms can create devastating damage that change people’s lives forever.”