Why ham radio endures in a world of tweets 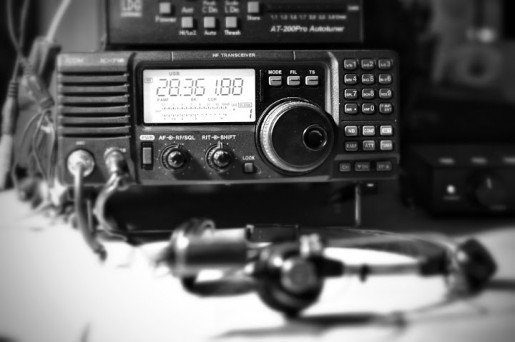 Somehow it makes little sense that amateur “ham” radio continues to thrive in the age of Twitter, Facebook and iPhones. Yet the century-old communications technology — which demands such commitment that you must generally pass an exam to receive a licence — currently attracts around 350,000 practitioners in Europe, and a further 700,000 in the United States, some 60 per cent more than 30 years ago. What is it about a simple microphone, a transmitter-receiver and the seductive freedom of the open radio spectrum that’s turned a low-tech anachronism into an enduring and deeply engaging global hobby?

For a start, there is that thrill in establishing a magical person-to-person long-distance radio conversation that no commodified internet communication can compete with. In a world of taken-for-granted torrents of emails, instant messages and Skype video-chats, there is a purity and a richness in the shared experience of exchanging “73s” during a live “QSO” with strangers on another continent. Why, the very “ham slang” that defines the community — 73 translating as “best regards”, and QSOs as two-way conversations — tells practitioners that they belong to a special, mutually curious and highly courteous club. And the fact that DXers — long-distance amateur operators — take the trouble to acknowledge received transmissions and conversations by sending their new contacts custom-designed postcards through the analogue postal service… well, that is charm itself in a world where it’s considered excessive to end a communication with anything more effusive than a “bestest”.

You only need study a handful of these cards to understand, even today, the old-fashioned excitement of connecting with a stranger who might be many thousands of miles away. The postcards — known as QSL cards — can be as quirky and personality-filled as the senders themselves. At times humorous and characterful, at others terse and geographically factual, they have naturally inspired their own subculture that has spurred DXers to collect and display them much as they would colourful foreign postage stamps.

The cards invariably display as a minimum some basic factual information about the sender. This will generally include the radio operator’s individual call sign, his (there are not too many hers) location, and a few details about the signal detected. And just to show that the Twitter generation did not invent the linguistic contractions exemplified in text-message-speak, QSL cards too rely on slang and abbreviations to pack information into a tight space. So cards will display the “RST” — the received radio station’s readability, signal and strength; perhaps details of the sender’s “XMTR” (transmitter) and “ANT” (antenna); and occasionally a request to reciprocate, expressed as the shorthand “PSE QSL TNX” (please send an acknowledgement card, thanks) or the more chatty “hw abt a crd om?” (how about a card, old man?). Old man, by the way, is not a reference to the recipient’s age — just as, on the rarer occasions when the DXer is female, she is referred to as a “YL”, a young lady, whatever her chronological age.

DXers have been exchanging QSL cards since at least 1916, when Edward Andrews of Philadelphia — callsign 3TQ — recorded the receipt of a card from 8VX of Buffalo, New York. Over the next decade, the hobby took off — so much so that, by 1928, Paul Segal (W9EEA) had formulated an “amateur’s code” setting out six key qualities to which practitioners must adhere: “The radio amateur is considerate… loyal… progressive… friendly… balanced… [and] patriotic,” Segal specified, always ready for service to country and community.

Since then, the hobby has captivated royalty and celebrities alike. Among the most celebrated DXers have been the late King Hussain of Jordan (callsign JY1), Queen Noor (JY1H) and Juan Carlos, King of Spain (EA0JC). Had you picked the right moment, you could have chatted to Morocco’s King Hassan II (CN8MH), the former Sultan of Oman (A41AA) or Bhumiphol Adulayadej, King of Thailand (HS1A). If monarchs have never appealed, you could instead have shot the breeze with Marlon Brando (FO5GJ), prime minister Rajiv Ghandi of India (VU2RG), or the US newsreader Walter Cronkite (KB2GSD) — not forgetting the singer Cliff Richard (W2JOF), Joe Walsh of The Eagles (WB6ACU), and genuinely beyond-this-world DXers such as Yuri Gagarin and Helen Sharman.

It’s little wonder that collectors describe the buzz of receiving a new exotic foreign card as akin to that of philatelists discovering a rare commemorative stamp. That explains why the late Jerry Powell, a New Jersey ham between 1928 to 2000 (W2OJW), proudly displayed the 369 cards he had gathered from Okinawa to Papua. Another obsessive collector, Thomas Roscoe of Brookfield, Ohio (K8CX), has created an awe-inspiring QSL museum where he displays his trophies from Afghanistan to Zimbabwe (you can see his individual cards at hamgallery.com). Take a journey with Roscow to Wallis & Futuna Island and Western Kiribati, to Kyrgyzstan and Kerguelen Island; visit “states” whose international status is somewhat contentious, such as the Republic of Ichkeria and the Principality of Sealand; celebrate one-off events such as Operation Desert Storm in Saudi Arabia, or the Queen Mary’s last voyage.

But it’s not simply the romance of card-collecting that continues to inspire DXers, nor the blunt urge to communicate. Instead, hams talk proudly about belonging to a global “brotherhood”, with few rules and little bureaucracy and the ability to transcend language, religion and race — while never quite knowing who they might come in contact with.

Plus, of course, the chance to be a genuine real-life hero. Days after a magnitude 7.3 earthquake devastated Haiti in January, amateur radio operators were busy at work connecting rescuers within the country and contacting survivors’ families. When a magnitude 8.8 earthquake hit Chile the next month, and the phone network collapsed, a radio operator called Alejandro Jara broadcast the first information from the ground. Hams stepped in on September 11, 2001, and during Hurricane Katrina. Then there was Tony Pole-Evans, a bird-lover with a short-wave radio on Saunders Island, who famously risked his life during Argentina’s 1982 invasion of the Falkland Islands to radio the first news back to Britain that 1,000 soldiers had landed on Goose Green.

How exciting it must have been to intercept that particular radio call. And boy, what a QSL card to top one’s collection. You can tweet all you like, but this is the way to communicate.