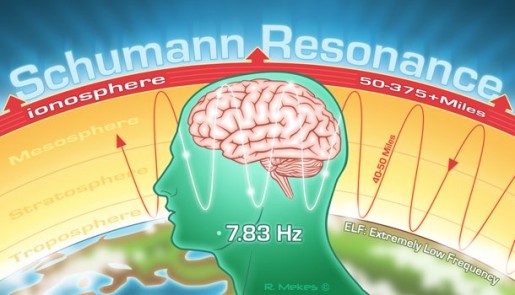 The Schumann Resonances are quasi standing wave electromagnetic waves that exist in this cavity. Like waves on a spring, they are not present all the time, but have to be ‘excited’ to be observed. They are not caused by anything internal to the Earth, its crust or its core. They seem to be related to electrical activity in the atmosphere, particularly during times of intense lightning activity. They occur at several frequencies between 6 and 50 cycles per second; specifically 7.8, 14, 20, 26, 33, 39 and 45 Hertz, with a daily variation of about +/- 0.5 Hertz. So long as the properties of Earth’s electromagnetic cavity remains about the same, these frequencies remain the same. Presumably there is some change due to the solar sunspot cycle as the Earth’s ionosphere changes in response to the 11-year cycle of solar activity. Schumann resonances are most easily seen between 2000 and 2200 UT. (source:NASA)

Schumann frequency and its effects on the body
The way the earth’s pulsating frequency operates can now be explained in detail. Applying the earth’s frequency to the human body has been shown in double blind studies and in practical application to have definite positive results with many disorders. The success of therapy with 7.83 Hertz pulsating magnetic fields very clearly demonstrates the importance of this frequency.

The human brain in a healthy state has also been shown to oscillate at 7.83 Hertz. Consequently our brains are in a natural state of resonance with the earth. The loss of this characteristic would result in not insignificant limitations to our vitality and health.

In just the same way the natural oscillations of water can be disrupted or superimposed by artificially generated frequencies. In addition the information-bearing structures can be destroyed on the long journey through the pipes. If this is the case, water can no longer fulfil its regulatory role in the body properly. The Schumann frequency is all the more important here.